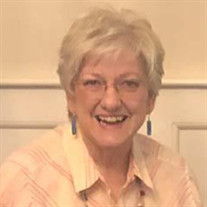 Ann Moreland Forsee age 74 ended her courageous battle with pancreatic cancer on February 15, 2022 and passed away peacefully at her home while under hospice care. Ann was born June 19, 1947 in Kansas City, Missouri. She was the first of the four children born to Letty and C.B. Moreland. During her childhood years she was raised in the Berclair area of Memphis. Her family was very active at Berclair Baptist Church where Ann accepted Jesus as her Lord and Savior when she was a child. Ann’s family moved back to Kansas City where she spent her high school and young adult years. In 1974 Ann married Don Forsee and they started their family in Kansas City. In 1980 the family moved into their Germantown home when Don’s job transferred them to Memphis. Ann was a wonderful homemaker raising her children and providing a beautiful home life for her family. When her children became school age, Ann began working part-time as a school bus driver. She enjoyed driving the neighborhood children including her own to their Germantown schools. When her two children were grown Ann began working in retail at the Gap Kids store in Germantown. Ann’s greatest joy was being with her children and grandchildren. Ann had a love for music and the fine arts. It was always with great pride for her to watch her granddaughter’s ballet and her oldest grandson’s marching band and piano performances. It was also a great joy for her to see her youngest grandson’s involvement in theatre sound and lighting and his theatrical performances as well. Ann is preceded in death by her precious infant son Benjamin, by her parents, and by her sweet sister Ginny. Ann leaves her husband of 48 years Don Forsee, a son and daughter-in-law Matt and Kristina Gifford, a daughter and son-in-law Melissa and Greg Williams, grandchildren Jacob Williams, Matthew Williams, Kylee Gifford, a brother and sister-in-law Joe and Cindy Moreland, a sister and brother-in-law Ruthie and Vince Schmidt, a brother-in-law Kenny Hunt, a sister-in-law Cindy Forsee Hill, and many nieces and nephews. A “Celebration of Life” graveside service will be held Saturday, March 19 at 2:30 at Fountain Square section where Ann’s ashes will be interred. (Meet at the funeral home by 2:00 p.m.) In lieu of flowers. donations may be made to Getwell Church, 7875 Getwell RD Southaven, MS, 38671, when donating by check put "in memory of Ann Forsee" on the memo line or www.getwellchurch.org - give online memorial

Ann Moreland Forsee age 74 ended her courageous battle with pancreatic cancer on February 15, 2022 and passed away peacefully at her home while under hospice care. Ann was born June 19, 1947 in Kansas City, Missouri. She was the first of the... View Obituary & Service Information

The family of Ann Moreland Forsee created this Life Tributes page to make it easy to share your memories.