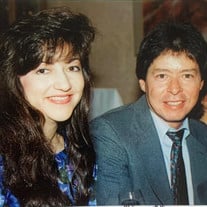 Funeral Services for Mr. Gregory Pilcher and his wife Mrs. Anita Pilcher will be conducted on Tuesday October 19th 2021 at 10:00am at St. Anne Catholic Church (Highland). Greg Duane Pilcher, age 64, and his wife Anita Louise Pilcher, age 59, both passed away. Greg was born in Tuscon, Arizona on May 20, 1957 and died in Bartlett, Tennessee on October 7, 2021. He worked in Memphis construction as a general contractor and was the proud owner of the company “Greg Pilcher Construction.” Anita was born in Miami, Florida on January 24, 1962 and died in Bartlett, Tennessee on September 19, 2021. She worked as a saleswoman throughout her life, working in both Memphis and Atlanta. Mrs. Pilcher earned her degree in marketing summa cum laude at Mercer University in Macon, Georgia where she grew up. Anita was a one of a kind person. She was a gifted artist and singer, excelling at everything she did and always going above and beyond. She served as a cantor at St. Ann Catholic Church for years and was renowned by people for having a beautiful voice that brought people to tears. She ran several small businesses throughout her life including her jewelry business “Anne by Hand,” and her southern baked sweets business “Happy Magnolia.” Anita’s young, creative spirit and her ageless beauty were some of her most remarkable attributes. She had a playful sense of humor and an infectious laugh that could make anyone’s day. Her sincere, kind heart touched the lives of everyone she knew. She was a blessing to know. Mr. Pilcher grew up his whole life in Memphis, Tennessee where he graduated from Raleigh-Eqypt High School. He worked in construction and opened his own business “Greg Pilcher Construction” as a general contractor in 1999. Greg had a love for the creative side of his business, including design and decoration. In his free time he worked on building and reconstructing furniture pieces, which he would gift to family or use to furnish his office and home. He was a devoted servant to his family, sacrificing everything for his wife and children. He was an entirely selfless and loving person who did right by everybody. Greg had an old soul, always full of advice, wisdom, and a passion for all things mysterious and unknown. Anybody who knew him or stepped into his office or home knew that he was a devout Catholic. His life serves as an example of what it means to be a man of God. They were preceded in death by Greg’s father Sam C. Pilcher, and Anita’s parents Preston E. Wiggins and Maria Luisa Razon, along with her brother Charles Wiggins. They are survived by Greg’s children Jason Daniel Pilcher and Chelsea Nicole Pilcher, along with their children together, Miguel Alexander Pilcher and Isabel Micaela Pilcher. They are also survived by Greg’s mother Norma Lee Pilcher, his brothers Derek Pilcher and Brian Pilcher, as well as Anita’s siblings Preston Wiggins, Henry Wiggins, and Tina Wiggins. The family will receive friends on Tuesday October 19, 2021 from 9:00am until the time of the service at 10:00am.

The family of Anita Louise Pilcher created this Life Tributes page to make it easy to share your memories.

Send flowers to the Pilcher family.