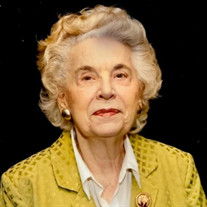 On Monday, January 4, 2021, Allie Jewel Boatwright Greene, loving mother, grandmother and great grandmother, entered Heaven at age 99. Allie was born on January 1, 1922, in Holly Springs, Mississippi, to Alma Rossel Boatwright and Leroy Alexander Boatwright, Sr. Allie graduated from the University of Alabama with a B.S. Degree in Environmental Science, and received her M.A. Degree in English from Memphis State University, plus 45 hours toward her Doctorate in Education from the University of Mississippi. On December 27, 1942, Allie married her childhood sweetheart, Edwin Eugene Greene, Jr. She accompanied her husband to New York to see him ship to the European Theater, for 25 months service in World War II. During the war Allie was Secretary to the Chinese Ambassador, Wei Tao Ming, in Washington, D.C., in the office which handled Lend Lease Shipments to General Chenault’s Flying Tigers in Burma. Allie was an explorer and adventurer. She enjoyed traveling throughout her life. She visited Russia, China, India and numerous other countries in Europe, Central and South America and in Asia, as well as living in Nuremberg, Germany for several years. A member of Alpha Delta Kappa, international honorary teacher’s sorority, Allie taught at schools in Silver Springs, MD, Nuremburg, Germany, Highland Park, MI, and Memphis, TN. Allie was principal of Grand Junction Tennessee Elementary School for 25 years. She was a member of The Germantown Garden Club, The Josephine Circle, and The Shelby County Republican Women’s Club, while living in Germantown, TN. During her time living in Texas, Allie was a Charter member of Heritage Trails DAR and North Shore Republican Women’s Club. Allie also served as Vice-Chairman of the Republican Party for Marshall County, MS, alongside the love of her life, Edwin. In 2013, Allie was named Outstanding Woman Tree Farmer by the American Forest Foundation in Washington, D.C., for her 140 acres farm which is planted with 18 acres of old cypress, some hardwoods, and lots of pine. Allie was an avid and loyal University of Alabama alumnae. She was honored by the Environmental Science Department and the President of the University of Alabama, at the 2019 Alabama Homecoming celebration. She loved to watch the “Tide Roll”! Allie was a lifelong member of First Presbyterian Church, Holly Springs, MS, where she was married, her children were christened, and she taught Sunday school. Also, she was active in the PTA, a Cub Scout Den Mother, and worked with Girl Scouts there. While living in Texas, she was a member of Spring Cypress Presbyterian Church, Spring, Texas. Allie was preceded in death by her husband, Edwin Eugene Greene, Jr., her firstborn son, Edwin Eugene Greene, III, and her brother, Leroy A. Boatwright. She is survived by her sons, Allen Leroy Greene and Kerry Lawrence Greene, and her daughter, Dr. Patrice Elizabeth Greene Herring. Allie is survived by six grandchildren, Matthew Greene, Michael Greene, Caroline Greene Bradley, Blake Greene, Lindsey Greene and Aubrey Greene, and six great grandchildren, Allie Grace Greene, Andrew Jackson Greene, Parker Greene, Camille Greene, Eli Bradley and Beau Greene, and Allie’s brother, Toulman D. Boatwright. A funeral service will be held at Memorial Park Funeral Home, 5668 Poplar Avenue, Memphis, TN on Sunday, January 10, 2021 at 11am with a visitation one hour prior to service at 10 am. Her funeral service will be webcasted on the date and time of the service click on the link below to view: http://webcast.funeralvue.com/events/viewer/44620 In lieu of flowers, Allie has asked for donations to The Palmer Home for Children or the First Presbyterian Church, Holly Springs, MS.