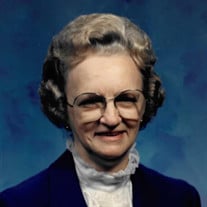 Wilma Mooney Tate, 92, of Memphis, Tennessee, passed peacefully on the morning of Sunday, September 13, 2020. A lifelong Mid-Southerner, Wilma was born in Greenfield, Tennessee to Jacob Warren Mooney and Bera Louise Poston Mooney on November 7, 1927. During her early childhood and primary school years, Wilma and her parents lived in Greenfield and Brownsville, Tennessee. After her family’s move to Memphis, Wilma was a student at Bellevue Middle School and completed her secondary education as a member of Central High School’s class of 1945. She then enrolled as an undergraduate at the University of Memphis (then known as Memphis State College) and earned a Bachelor of Science degree focused on elementary education. As an undergraduate, Wilma became a charter member of Sigma Kappa Sorority’s Beta Xi chapter and maintained a position after graduation as a national officer with the sorority for over ten years. Following her studies, Wilma accepted a position as a teacher at Bruce Elementary. She would later undertake positions at Cherokee Elementary, White Station Elementary, and Shady Grove Elementary in both primary and substitute teacher roles. She retired in 1992 after numerous years teaching first graders at Grahamwood Elementary and nearly 50 years as an educator. While in undergraduate studies, Wilma also met her husband, Herbert L. Tate Jr., to whom she was wed in 1951 at the newly completed sanctuary of Highland Heights Methodist Church. Their marriage would bear a daughter, Marcia, whom they loved and devoted themselves toward. Wilma and her Husband would relish 60 years as a married couple before Herbert’s passing in late 2011. Outside of her devotion to her marriage, motherhood, and career in education, Wilma dedicated herself to her church, charity, and broader teaching community. Always able to interweave her talents among the three. At Highland Heights, Wilma’s perennial supervision as the church school secretary oversaw the smooth operation of Sunday school and other activities every Sunday for over 50 years. She would work for the East Memphis and Greater Memphis Lioness Clubs as a member of the Lady Lions Auxiliary and would receive the Edward Dalstrom Distinguished Service Award for her commitment. Wilma devoted 27 years as a volunteer visitor docent at Methodist Hospital; giving over 4,000 hours of her time to the role. Calling upon her experience in Greek life and education, Wilma would be a charter member and long-time treasurer of the Alpha Psi chapter of the professional teacher’s sorority, Alpha Delta Kappa, a professional teacher’s sorority. When not offering her time to these organizations, Wilma enjoyed monthly luncheons among her former colleagues at the Shady Grove and Grahamwood retired teachers’ groups. Wilma is survived by her daughter, Marcia Tate Anthony, son in law Mark Anthony, and her grandson, William Tate Anthony. The family will receive relatives and friends on Friday, September 18 from 1:30 pm until the time of the Celebration of Life service at 2:30 pm at Memorial Park Funeral Home and Cemetery, 5668 Poplar Avenue in Memphis. The interment will immediately follow. In lieu of flowers, Wilma’s family requests donations be made to the Woman’s Exchange of Memphis, the Alpha Kappa Delta Sorority, or HeightCDC.org/donate (Save the Church).

The family of Wilma Mooney Tate created this Life Tributes page to make it easy to share your memories.

Send flowers to the Tate family.