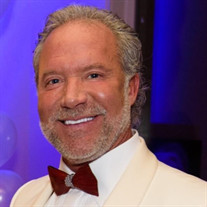 “Hey, Bud...” William Russell “Rusty” Hyneman was born on July 25, 1964, in Kansas City, MO. He’s the son of John and Jeanne Cox Hyneman. He and his brother Kevin were raised in the Memphis area, attending Southaven High School and Memphis State. Throughout Rusty’s life, he was filled with infectious energy. He was always entertaining and made sure everyone around him had a good time as well. Everything he did, he did it 110%. He was an advanced pilot with over 20 type ratings. He enjoyed flying planes, jumping out of planes, and occasionally rolling his planes. He enjoyed all things physical: pole vaulting, football, scuba diving, snow skiing, water skiing, obstacle races, cycling, weight training, golfing, surfing, kickball, and more. Rusty enjoyed fishing but not catching with his brother, Kevin. He built his first home at 18 years old and evolved into a prolific real estate developer and businessman of multiple industries. He was a Renaissance man. He was a gourmand and amateur sommelier. Rusty was a collector of Converse, always looking dapper styled by his wife, Caresse. “Front Row Rusty” never missed the main event, whether it was sports, music, or parties. Rusty was kind-hearted, generous, compassionate, hilarious, empathetic, loving, competitive, fiercely loved his family, never met a stranger, and treated everyone as equals. He is survived by his wife, Caresse Mills Hyneman, daughters, Amanda (John) Strawn and Rachel Hyneman; Grandsons: John Russell Strawn, James Brady Strawn, & Hudson Hyneman. Rusty is also survived by his loving parents John and Jeanne Cox Hyneman; brother Kevin (Cindy) Hyneman; his nieces, Bailey and Samantha Hyneman; and uncle Milton (Becky) Cox. A private family service will be held on December 10, 2020 at Memorial Park Funeral Home in Memphis, TN. A Celebration of Rusty’s Life will be held in the summer of 2021. The family is eternally grateful to the staff at MD Anderson in Houston, TX, Moores Cancer Center at UCSD in San Diego, CA; and Tennessee Oncology at Sarah Cannon Cancer Center in Nashville, TN. #allin

The family of William Russell "Rusty" Hyneman created this Life Tributes page to make it easy to share your memories.

Send flowers to the Hyneman family.