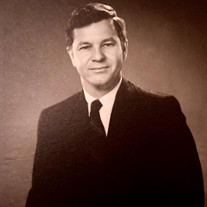 Both &#8220;Ham&#8221; and the Sterick Building came to the public square on the same day. He often made this Memphis-centric reference, and if anyone was a tried-and-true Memphian, Ham was, from the muddy Mississippi River to his entire educational... View Obituary & Service Information

The family of William Hamilton "Ham" Smythe, III created this Life Tributes page to make it easy to share your memories.

Both “Ham” and the Sterick Building came to the public square...