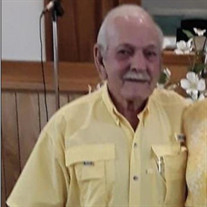 Wilbur William “Bro. Will” Robichaux, age 82, resident of Somerville, Tennessee, and husband of Kaye Lynn Robichaux, departed this life Friday morning, December 3, 2021, at his home. Will was born February 20, 1939, in Montegut, Louisiana to the late Stanley and Rosanna Pitre Robichaux. Will graduated from Terrebonne High School in Houma, LA in 1958. He was veteran serving with the army CDAC unit until 1964. Upon discharge he began his career as an extremely talented carpenter who could take a disaster & turn it into a treasure or look at a picture and make it a reality. He always had a phrase saying, “from womb to tomb, I can build it.” And he could. He worked in many areas during his career such as Louisiana, Tennessee, Texas and returning to Somerville. He married Kaye in 1982. Together they created a wonderful Christian life, working and singing praises unto the Lord. He was a faithful member, Sunday School teacher, as well as, music director of Landmark Missionary Baptist Church in Somerville, TN. Just his life was a ministry. He was such a man of faith. He always had a kind loving smile and word for everyone & treated others as he would like to be treated. He was quite a prankster as anyone who knew him would tell you. Will was an avid hunter. He enjoyed his deer & dove season trips to Comanche, Texas & fishing trips in Louisiana. Those left to cherish his memory are his wife, Kaye Lynn Robichaux, his sons Dale (Pam) Robichaux, Kirk (Nicole)Robichaux, of Houma, LA, Mark Kelley of Somerville, TN daughter, Tina Brown of Lawrenceville, GA, Paula Markham of Somerville. His grandchildren who he was so proud of, Paige (Matthew) & Dillon Robichaux, Kristin Verrett (Colby), all of Houma LA, Cara Brown of Lawrenceville, GA, Payton Kelley (Jason)of Lakeland, TN, Cody Markham (Bonnee) of Memphis, TN, Kayla Markham of Somerville. He had six great-grandchildren. A special brother-in- law, David Cannon of Somerville, TN. Two sisters-in-law, Arlette Robichaux of Montegut, LA & Barbara “Bobbie” Robichaux of Houma, LA. His special hunting buddies, Joe & Jason Evans, Calvin Spruill of Comanche, Texas. His beloved cat, or nurse as he referred to her, Prissy. He was preceded in death by his parents, brothers Robert Robichaux, Druby Robichaux, and great-grandson William Markham. There will be a memorial service Saturday December 11, 2021, at 11:00 am at Landmark Missionary Baptist Church 16480 Hwy 64. Somerville, TN. In lieu of flowers the family requests memorial donations be directed to American Cancer Society, VA Hospital, Memphis, TN. or Landmark Missionary Baptist Church P.O. Box 721 Somerville, TN 38068

The family of Wilbur Robichaux created this Life Tributes page to make it easy to share your memories.

Send flowers to the Robichaux family.