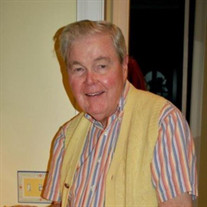 Walter Francis Little, Jr., 93, of Germantown, TN passed away on May 20, 2021. He was the son of the late Walter F. Little, Sr. and Josephine Bailey Little of Leland, MS and Charleston, SC. He is survived by his wife of 62 years, Beverly Cox Little, and son Dr. Walter Little, III, a urologist in Hendersonville, TN, and his wife Dr. Shannon Little; a daughter, Dr. Vicki Little Chandler of Eads, TN, a nurse practitioner and an assistant professor at UTHSC, College of Nursing, and her husband, Stephen W. Chandler; and grandchildren AnMei Little and Jonathan, Matthew, Joshua Chandler. He was preceded in death by his youngest son, Jeffrey Thomas Little. He considered his greatest achievement finding a beautiful, kind wife as a lifelong companion who lovingly nurtured their children. Mr. Little served in the U.S. Army as enlisted men’s counselor at the close of WWII. He was a 60+ year member of Second Presbyterian Church, Memphis, where he served earlier as an usher and later was on the board of deacons. He was a member of the Jeb Russell Sunday School Class. His early years were spent in Charleston, SC where he was an ardent amateur sailor competing in summer regattas, enjoying tennis with friends and hunting in the nearby Santee River Swamp with his father. Mr. Little was a Phi Beta Kappa, Magna Cum Laude graduate of Washington & Lee University where he was a member of the Kappa Alpha Order founded at W&L during General Robert E. Lee’s presidency. Mr. Little started his business career at the Greenville (MS) Delta Democrat-Times under the Pulitzer Prize winning editor, the late Hodding Carter. He resigned to become assistant manager of Delta Council, Stoneville MS, and then advertising manager of the Yazoo City (MS) Herald. At 29, he founded Little Publications, Inc., in Memphis and pioneered the publishing of national specialty magazines for agriculture, including Cotton Farming, Rice Farming, Soybean South, and Custom Applicator. The publications where sold at his retirement and are still being successfully published today with offices in Memphis and Illinois. He was a former director on the board of the National Agri-Marketing Association, Chicago, and the past-president of its Mid-South chapter. Funeral services will be held at Memorial Park Funeral Home and Cemetery, 5668 Poplar Ave., Memphis TN 38119. The visitation will begin at 12:00 p.m., with the service starting at 1 p.m., Wednesday, May 26, 2021. Interment will be in Memorial Park Cemetery.

Walter Francis Little, Jr., 93, of Germantown, TN passed away on May 20, 2021. He was the son of the late Walter F. Little, Sr. and Josephine Bailey Little of Leland, MS and Charleston, SC. He is survived by his wife of 62 years, Beverly Cox... View Obituary & Service Information

The family of Walter Francis Little Jr. created this Life Tributes page to make it easy to share your memories.

Send flowers to the Little family.