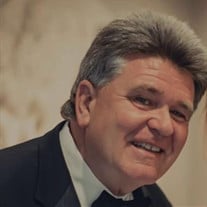 The greatest family man, Walter Joseph Phelan, III, also known as “Bubba,” left our world far too soon on Thursday, October 29, 2020. We are comforted knowing that he is finally in the loving arms of his predeceased parents, Carolyn Cooper Phelan and Walter Joseph Phelan, Jr., along with his brother, Price Anthony Phelan. Bubba leaves behind his cherished wife of 32 years, Cindy Compton Phelan, and his adoring children, Keeley Phelan Childress (Bailey) and Walter Joseph Phelan, IV. He is survived by his sister, Juanita Warthen (Brad) of Columbia, South Carolina and brothers, Cooper Phelan (Tina) and Steve Phelan (Deenie) both of Memphis. He also leaves behind the apples of his eyes, his three grandchildren, Jackson, Campbell, and Collier Childress. Bubba was the beloved uncle to nieces, Kathleen Warthen (Bentley Coffey), Nell Warthen, and Becca Warthen, all of Columbia, South Carolina and to Tina Bell (Jason) and Christin Yates, both of Memphis and to nephews, Matt Warthen (Ashley) and Andy Warthen of Columbia, South Carolina along with Kevin Phelan (Christine), Brooks Phelan, and Brendan Phelan, all of Memphis. He will be deeply missed by a host of great nieces and great nephews and an incredible group of cousins and friends. Bubba was born in Jackson, Tennessee on June 24, 1952. He attended elementary school at Our Lady of Sorrows in Birmingham, Alabama. His years in Homewood were so special to him. He graduated from Christian Brothers High School in 1970 and went on to attend Memphis State University where he was a member of the Pi Kappa Alpha Fraternity. He was a longtime parishioner of St. Louis Catholic Church, where he rarely missed a Mass. He started his professional career at Victoria Station and moved across the country to open multiple restaurants. He then found himself back in Memphis where he would work for Holiday Inn, Promus Companies, and then retire from Harrah’s after 30 years. Walter was a treasured boss to so many people. His even temperament and charming personality were gifts that all his employees cherished. Friends and family will always think of him as a devoted husband, father, grandfather, brother, uncle, cousin, and friend. He was a “second dad” to so many. If you were lucky enough to know him, you were lucky enough to be loved by him. His contagious smile and energy will always be remembered. He adored being “Bubby” to his grandchildren and looked forward to their visits and nightly FaceTime calls. He was an avid sports fan, showing his greatest allegiance to the Alabama Crimson Tide, University of Memphis Tigers, and the St. Louis Cardinals. His pranks, perfect Phelan hair, constant English Grammar corrections, and his valued guidance were second to none. If you weren’t part of the Phelan family, he made you wish that you were. His generosity, love of family, and compassion will be missed by all who knew him. Rest in peace, our precious “Bubby.” The family will receive relatives and friends on Tuesday, November 3rd from 9:00 am to 10 10:00 am and the funeral mass will commence at 10:00 am at St. Louis Catholic Church, 203 S White Station Road in Memphis. The committal service will take place privately. In lieu of flowers, memorials can be sent to Birthright of Memphis. Click the link below to donate. https://www.birthrightofmemphis.org/. To view the tribute slideshow click the link below: https://www.tributeslides.com/tributes/show/F5TFM24JW9RM2CHQ

The greatest family man, Walter Joseph Phelan, III, also known as &#8220;Bubba,&#8221; left our world far too soon on Thursday, October 29, 2020. We are comforted knowing that he is finally in the loving arms of his predeceased parents, Carolyn... View Obituary & Service Information