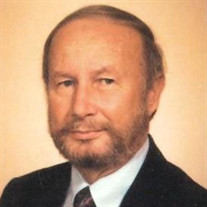 Long time Germantown resident, born January 25, 1929 in southeast Missouri, passed away peacefully November 21. 2021. He was 92 years old. Gene was a depression era child, intelligent and resourceful, he earned the rank of Eagle Scout at 14 years old in 1943, which was a proud accomplishment he would always cherish. He was able to succeed in life with support from his loving wife Lucy of 69 years. He was an army Sargent in the early 1950’s and he used the skills he learned in the service to succeed in many different occupations, mostly in sales and manufacturing. He retired from Cleo Wrap (Gibson’s Greetings) only to start a new career with Crye Leike Realtors where he developed a thriving business. He was the father of eight successful children. Gene had many passions: woodworking, general mechanical work and other handyman endeavors but most of all he loved GOLF! He was very talented, competed in many events and he passed this passion on to everyone he encountered that was interested in it. Gene was very proud of his wonderful wife and his eight children. Being a devout Catholic he did not disappoint his faith! We will miss our Dad but we are comforted to know that he loved us all and that he is at peace. He was predeceased by his wife Lucy Carr French, daughter Jeana Bartlett (Richard), son Mike French, brother Bill French, and parents Willis and Viola French. Left to celebrate him are, Karen Eftink (Stephen), Nick French (Jackie), Joe French, Julie Cochran (Tommy), John French (Donna), and Patrick French (Jennifer), 19 grandchildren, and 22 great grandchildren. Our dad was very successful at many things, but he was most successful at burning the daylights out of anything he put on the grill! He would tell us that charred to a crisp chicken is healthy. Burgers were always reduced to the size of a poker chip. Forget about a good steak. He was the kind of dad that said “rub a little mud on that torn up knee” or “I’ll spit on that cut and it’ll be all better”. Or don’t worry about that bike that broke in half, “you’ve still got half a bike”. In short, he never let anything dampen his enthusiasm nor get in his way of success. Thank you to the kind care givers at Memphis Jewish Home and Rehab Facility. Rest in peace Dad. Much love, your family. We will celebrate his life in a private Mass at Our Lady of Perpetual Help Catholic Church in Germantown on November 30, 2021. In lieu of flowers, please send donations to St. Jude Children’s Hospital in his name.

The family of W. E. "Gene" French created this Life Tributes page to make it easy to share your memories.

Send flowers to the French family.