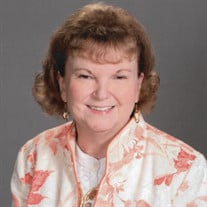 Virginia Ricketts Whaley, 71, of Cordova, passed away on Sunday, August 15, 2021. Virginia was born October 17, 1949, in Jackson, Tenn., to Robert T. Ricketts and Evelyn Lucille Black Ricketts. She married her high school sweetheart, Ronald Whaley, in 1969, and the couple moved to Knoxville, where she enrolled at the University of Tennessee. She graduated with a degree in home economics education and later completed a master’s degree in counseling from then Memphis State University. Virginia held various teaching roles in Tennessee and Alabama, most notably at Germantown High School, where she served as a teacher and then guidance counselor for 25 years. No matter her administrative workload, she always made time for her students and could often be seen on the sidelines of football games and other sporting events taking photographs for the school and for the Germantown News. Caring for her students was her life’s passion, perhaps only rivaled by that of being a mother and grandmother. In addition to her photography pursuits, Virginia loved spending time at the beach with friends or family and particularly loved hunting for shells at Sanibel Island. After her own battle with breast cancer in 2008, she became a dedicated volunteer at West Cancer Center, spending countless hours supporting and ministering to other breast cancer patients. She was a member of and regularly attended Christ the King Lutheran Church. Her family was her greatest earthly treasure, especially her sons and grandsons. She leaves a legacy of selflessness and generosity and will be greatly missed. Virginia is preceded in death by the love of her life, Ron Whaley; her parents; her brother, Robert T. Ricketts, Jr.; her sister, Beverly Ricketts Maxwell; and her beloved aunt, Geneva Whaley. She is survived by her sons, Ronald Kirk Whaley, Jr., of Cordova, and Christopher Whaley (Kathleen) of Birmingham, Ala; her grandsons, Samuel and Hudson; and her nephews, Neal Maxwell (Shelly) of Germantown, and Marc C. Ricketts (Alexandra) of Portland, Ore.; as well as other loving relatives, dear friends, and former students. The family would like to thank the memory care staff at The Pointe at Kirby Gate for their care and genuine compassion. There will be a memorial service on August 28 at 1pm at Christ the King Lutheran Church, 5296 Park Ave., in Memphis. In lieu of flowers, the family asks that donations be made to Christ the King Lutheran Church or the Alzheimer’s Association in Virginia’s honor.

The family of Virginia Ricketts Whaley created this Life Tributes page to make it easy to share your memories.

Virginia Ricketts Whaley, 71, of Cordova, passed away on Sunday,
August...

Send flowers to the Whaley family.