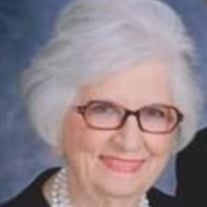 Virginia Dare Colvett Ford, age 88, of Collierville finished her earthly journey on September 14, 2021. She was born on January 26, 1933 in Alamo, TN. Virginia was the daughter of the late John Clifton and Lottie M. Robertson Colvett. Her family moved to Memphis when she was three years old. After graduating from Memphis Technical School in 1951, she went to work for an ad agency. In 1955 she joined WREC Television Station before they ever went on the air, as Executive Secretary to notable Memphian, Charles Brakefield, station manager and son-in-law of Hoyt Wooten, owner of the station. Her tenure lasted thirty-six years and she witnessed many changes and the growth of the television industry, along with new owners and the new call letters WREG. In September 1963 she met her future husband, Marvin Ford, on a blind date. That blind date was the beginning of a strong, loving relationship with their marriage on April 18, 1964, lasting fifty-seven wonderful years. They made their home in Memphis and Collierville, TN where Marvin had an extensive career in the Memphis Cotton industry. Upon their retirement Virginia and Marvin became world travelers. Some of their greatest trips were in Asia, with China being their favorite country. Not only did they make wonderful memories, but they were able to collect statutes, china, paintings, and other items from their many trips abroad that filled their beautiful home. Friends and family share in their love for travel by accompanying them on their trips. Oh, what stories and memories they have shared with those closest to them! Virginia and Marvin were active members of Collierville United Methodist Church, where they served on numerous committees as well as delegates to Annual Conferences. They sang in the choir together for over 50 years. Their faith walk has been a testimony to lives well lived and an inspiration to many people. It was never just Marvin or just Virginia. It was always "Marvin and Virginia." A partnership like no other, they reached out together to meet needs as they saw them. No one ever had to ask for help! They saw the need and moved to help in any way possible, from Marvin's fabulous potato salad and Virginia's delicious pies to generously supporting various monetary needs of the church and others. Together they have touched so many lives and have loved us all well! In lieu of flowers, the family requests memorials be sent to Collierville United Methodist Church, 454 West Poplar Avenue, Collierville, TN, 38017, designated to the Music Fund. Visitation will be held at 1:00 p.m., Sunday, September 19, 2021, at the Poplar Sanctuary of Collierville United Methodist Church with the Funeral Service to begin at 2:00 p.m. An Interment Service will follow at the Memorial Park Rotunda and Mausoleum, 5668 Poplar Ave, Memphis, TN, 38119.

Virginia Dare Colvett Ford, age 88, of Collierville finished her earthly journey on September 14, 2021. She was born on January 26, 1933 in Alamo, TN. Virginia was the daughter of the late John Clifton and Lottie M. Robertson Colvett. Her family... View Obituary & Service Information

The family of Virginia Dare Colvett Ford created this Life Tributes page to make it easy to share your memories.

Send flowers to the Ford family.