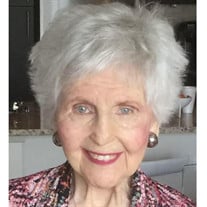 Velma “Sally” Davis Stewart passed away on June 7, 2021, at the age of 100 blessed with amazing health throughout her years. Velma was born in Memphis, Tennessee on November 11, 1920, and attended Maury Elementary, Bellevue Junior High School, and graduated from Memphis Technical High School in 1937 where she met her husband “Rut”. She lived at 2535 Union Avenue for 70 years in a house built by her father as a wedding gift until her move to Houston at age 96 to be near her daughter Gwen. She worked at several jobs during her life but was most proud of working at the IRS for 25 years retiring at age 85. Velma’s faith was an integral part of her life. She was an active member of First Evangelical Church for over 65 years where she helped with Sunday School and enjoyed her adult Sunday School Class, The Encouragers. Her hobbies included sewing, reading western novels, vacations, eating out, and just having “good ole fun. “ Velma’s personality could be summed up in one word- FUN- fun to be around, planning fun, and having fun such as her 4th of July picnics, trips, and birthdays. Being very patriotic, her July 4th party always began with a rousing Strauss march parade around her large backyard followed by volleyball, ping pong tournaments, and fireworks. Family trips included driving in an unairconditioned car from Memphis to Acapulco! Birthdays were always a fun tradition complete with games even as adults. Her favorite party games were “penny hunt”- hiding pennies all around her house and bean bag throw. Since she was a cowgirl at heart, she requested that her 85th birthday be spent at a dude ranch in Texas complete with horseback riding. For her 90th birthday she wanted to dance and dance she did and then again on her 95th! She loved her family beyond measure including nieces and nephews. Velma “Sally” was the glue and matriarch for both sides of the family. We will all remember some of your sayings such as “Let the Good Times Roll!” and “If You Did Your Best- YOU WON!” She was beautiful on the outside but even more so on the inside, always willing to help anyone in need and generous almost to a fault. In a note she penned she listed five things she loved the most- her family including in-laws, her friends, nature especially winter trees, the Mississippi River, “and most of all knowing Jesus Christ as her personal Savior.” Velma was preceded in death by her husband of 48 years, James Russell “Rut” Stewart and her grandson Graham Stewart. She leaves behind her three children Marilyn Witt ( Bill-deceased), Jim Stewart (Traci), and Gwen Ennis (Ken); her grandchildren Caroline Witt, Stewart Witt (Amy), Emily Ennis Leitch (Justin), Eleanor Ennis Langston (Brad), and Harrison Stewart; great grandchildren, nieces, and nephews. She was also preceded in death by her parents Erma Whitley Davis and Edmund Pettus Davis and a special lifelong friend Madeline Schwill. A private burial service will be held with a Celebration of Life service to be held on July 10th at 2pm at Memorial Park Funeral Home. In lieu of flowers, the family asks any donations be made to the Salvation Army or the American Red Cross. Click the link below to view the webcasted service: http://webcast.funeralvue.com/events/viewer/55467/hash:5E33790DB2CDA045

Velma &#8220;Sally&#8221; Davis Stewart passed away on June 7, 2021, at the age of 100 blessed with amazing health throughout her years. Velma was born in Memphis, Tennessee on November 11, 1920, and attended Maury Elementary, Bellevue Junior... View Obituary & Service Information