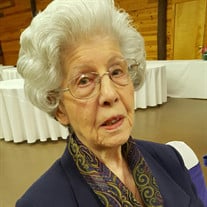 Valeria N. Quarin, 93, passed away on April 18, 2020. Valeria was born in San Vito al Tagliamento, Italy 93 years ago on Christmas Day of 1926. She was the eldest of 9 children; five sisters and three brothers. She lived in the small town of Gleris, Italy until she married her husband Joe Quarin in 1946. Having survived World War II, they both worked on farms and vineyards. Looking for a better life, Joe left for Toronto, Canada and obtained work in construction as a migrant worker. After three years, he had saved enough money to bring his wife, Valeria, and their two children to Canada. After nine months of a harsh cold winter and help from his brother Nick, Joe received a work visa in Memphis, Tennessee. The family moved to Memphis in February of 1957. The family learned to speak English in Memphis and became U.S. citizens in 1965. Joe and Valeria both worked at Fineberg Packing Company until they retired after 30+ years of service. Joe died in 1990. After Joe's passing, Valeria lived alone at her home and became the babysitter for her grandchildren. She got her driver’s license at the age of 55. She was a strong Communicant at St. Louis Catholic Church where she volunteered for Altar duties for several years until she could no longer drive. Valeria made it back to her homeland four times in her lifetime. Valeria began to develop dementia as she aged and lived with her daughter, Paola for three and one-half years before enrolling in Elmcroft Assisted Living where she remained for eight years. Her body eventually began to fail her, and ultimately, she succumbed peacefully in her bed. She is survived by her son, Alfonso, his wife Phyllis; their son Michael and his wife Kristine and their two children, Skylar and Landon of Nashville, Tennessee; their son David and his wife, Sara, along with their children, twins Eliana, Issac and Micah of Cumming, Georgia. She is also survived by her daughter Paola Quarin High; her son Milo and his wife Megan and daughter Olivia, and her daughter Gina High and her wife Christina Comas of Memphis, Tennessee. Valeria is also survived by her sisters in Italy Marcella, Mirella, Graciella and Lillana; and her brothers Vittoria in South America and GiGi in Australia. She is preceded in death by her husband, Joe, and her parents, Annibale and Anna Falcomer in Italy. She is also preceded in death by her sister Luciana and her brother Marino in Italy.

Valeria N. Quarin, 93, passed away on April 18, 2020. Valeria was born in San Vito al Tagliamento, Italy 93 years ago on Christmas Day of 1926. She was the eldest of 9 children; five sisters and three brothers. She lived in the small town of... View Obituary & Service Information

The family of Valeria N. Quarin created this Life Tributes page to make it easy to share your memories.

Send flowers to the Quarin family.