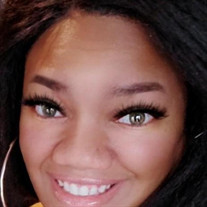 Tosha L. Costello was born December 14, 1982 to Robert (Deceased), and Delois Shears in Crumrod, Arkansas. She transitioned from this life in the early morning of October 18, 2020. After graduating from Elaine High School in Elaine, Arkansas, she moved to Memphis to live with her cousin, Jane Lecorn, who became like her second mother. She started working with the Shelby County Sheriff’s Office from August 2001 until March 2015, with a break from July 2004 through April 2006. During this period, she worked with Burlington Coat Factory. Tosha met the love of her life (Kurt Costello) on October 1, 2010. They were joined together as one, May 16, 2013. On July 24, 2015, her beautiful baby boy, Luke Evan Costello, arrived. She was a dedicated wife and mother. She was a devoted mother, first and foremost. She treasured her son and embraced every moment with him. Tosha has always been a smart, beautiful, kind, and creative person. She had a smile that would capture your heart. She made a lot of friends and associates along the way. She was a talented artist. She studied Art and Interior Design at the Art Institute University. She also received a certificate of Criminal Law & Procedure, with honors, at Ashworth College. She loved to work on projects and create things around the house. She had such a vivid imagination. She was a wonderful and talented writer. She decided to become a Writer/Author, and published her first book October 17, 2017, titled “A Little Cream In My Coffee”. She went on to write four more books. Her intentions were to publish a children’s book, in the near future. Tosha’s father, Robert Shears Sr, preceded her in death. She leaves behind to mourn her passing, her Husband, Kurt M. Costello; Son, Luke Evan Costello; Loving and devoted Mother, Delois Shears, Cabot, Arkansas; Brother, Robert Shears Jr. (Sherrie), Kansas City, Kansas; Sister, Kimberly R Shears-Barnes (Artelle), Cabot, Arkansas; Godmother, Jane Lecorn, Memphis, TN; A host of Aunts; Uncles; Cousins; and many friends. For those unable to attend please follow http://webcast.funeralvue.com/events/viewer/39446 for live casting og the Celebration of Life Service.

Tosha L. Costello was born December 14, 1982 to Robert (Deceased), and Delois Shears in Crumrod, Arkansas. She transitioned from this life in the early morning of October 18, 2020. After graduating from Elaine High School in Elaine, Arkansas,... View Obituary & Service Information

The family of Tosha L Costello created this Life Tributes page to make it easy to share your memories.

Send flowers to the Costello family.