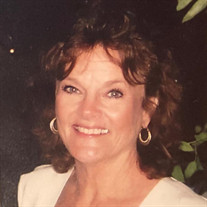 “There are few people in life and in this world that have such a profound effect on so many and are able to touch their hearts and inspire them to be the best they can be. Tonya Young was one of those people.” Tonya Anne Young, 72, of Olive Branch, MS, passed away on May 23, 2020, peacefully in the comfort of her own home, in the loving arms of her husband and her daughter. Tonya was diagnosed with Stage 4 Breast Cancer in November of 2010. After treatments, she was cancer free up until June 1, 2019. At that time, she was diagnosed with metastatic breast cancer, which was very aggressive and quickly spread throughout her body and brain. During her fight, Tonya’s Unwavering Faith in the good Lord, radiated through her. She remained optimistic, and not one time did you ever hear her complain; when asked how she was doing; She would always say without hesitation, “I am fine, don’t worry, God is Good & He has a plan - He’s got this.” Tonya showed boundless strength, courage, and determination, throughout her entire Journey and right up until the very moment, she was called home to be in the arms of her Lord and Savior Jesus Christ, early Saturday morning. Tonya was born in Dyer, TN on September 6, 1947, to A.B. Hugueley and Ruby Cheshier Hugueley. She was raised in Rutherford, TN, and graduated from Rutherford High School in 1965. At Rutherford High School Tonya was a cheerleader and selected as “Miss Rutherford” in 1965. After graduation, she attended Murray State University in Murray, Kentucky, where she received her Bachelor of Science Degree in Education in 1969. At Murray State, Tonya was honored to be “Ranger Sweetheart” (1967) and “Homecoming Queen” (1968). While at Murray State, Tonya met her future husband, Gerald Young, and they married on October 3, 1971. Tonya also attended the University of Tennessee at Martin, in Martin, TN, where she received her Master’s in Education and later received her Master’s + 30 from Murray State University. Tonya had a long and storied career in Henry County, TN, where she served as a Physical Education Teacher, Driver’s Ed Teacher, Guidance Counselor, High School Cheerleading Coach and Soccer Coach, for 31 years. Tonya was instrumental in starting and serving as Chairman of the Drug Free Alliance “D.A.R.E to Keep Kids off Drugs.” On November 25, 1982, Tonya and Gerald were blessed with the birth of their beautiful daughter Brittney Darling Young. After retiring, from the Henry County School System, Tonya embarked on another journey in helping kids, as a Guidance Counselor in Mississippi, in the Desoto County School System. She served at Lewisburg Middle School and Lewisburg High School. Tonya retired after 11 years in July of 2018, with a total of 47 years of service to young people. Tonya loved traveling, taking care of her flowers and plants, shopping, exercising, sports, being outdoors and watersports. She always maintained a strong and positive attitude and focused on living for her daughter and husband. Tonya was admired as a very special, loving, genuine woman with a kind heart. She was a valiant and courageous soul who was an inspiration to every person she encountered. Tonya lived her entire life for others. There was not a day that went by that she thought of herself over someone else. She was the most selfless person I have ever known. Once she met you, she would do absolutely anything in the world for you. She was truly compassionate and genuinely loved everyone. Everyone that has met Tonya would agree, wherever she was, she always brought enthusiasm, kindness, generosity, warmth, creativity, and boundless energy. Tonya was kind and nurturing, caring, inspiring, dedicated, hard-working and never hesitated to go the extra mile to make a difference in someone’s life. Tonya was LOVE. Tonya leaves behind her husband Gerald Young and her daughter Brittney Young. She is preceded in death by her father A.B. Hugueley and her mother Ruby Cheshier. Memorial Services Honoring the Life of Tonya Young will be held: Thursday, May 28th at Memorial Park Funeral Home & Cemetery- 5668 Poplar Ave Memphis, TN 38119 at The Riverside Chapel. Visitation will be from 11am to 1pm, Service will begin at 1pm and Graveside will be immediately following. In lieu of flowers, Memorials may be made in Tonya’s memory to St. Jude Children’s Research Hospital, 501 St. Jude Place, Memphis, TN 38105. Online condolences may be sent to the family at https://www.memorialparkfuneralandcemetery.com/obituaries/Tonya-Young/

&#8220;There are few people in life and in this world that have such a profound effect on so many and are able to touch their hearts and inspire them to be the best they can be. Tonya Young was one of those people.&#8221; Tonya Anne Young,... View Obituary & Service Information

The family of Tonya A Young created this Life Tributes page to make it easy to share your memories.

“There are few people in life and in this world that have such...

Send flowers to the Young family.