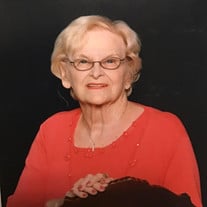 Tommye Riggs Adams, 95, passed away peacefully in Columbia,TN on Monday, February 10, 2020.She was born in Bearden, Arkansas on August 18,1924.She was valedictorian of her high school class before doing clerical work to support the war effort in World War II. After the war, she married Floyd Adams and raised a family of four in Memphis, Tennessee. She was known as a great southern cook and famous for her chocolate chip cookies. She was active in volunteering at Whitehaven High School and Memphis Preparatory School. She was preceded in death by her husband of 53 years, Floyd Adams and by her son, Ronald Adams of Manhattan Beach, CA. She is survived by her daughter, Floy Polen of Myrtle Beach, SC; her daughter-in-law, Ellen Adams of Manhattan Beach, CA; her daughter Patti (Sam) Horsley of Greensboro, GA; her son Jeff (Tina) Adams of Columbia, TN; and special family friend Charlie Leonard of Memphis, TN. She is survived by 9 grandchildren, 11 great grandchildren, and one great great grandchild. The funeral service will be held at Emmanuel United Methodist Church in Memphis,TN At 1 pm on Saturday, February 15,2020. Visitation will be 11 a.m.- 1 p.m. prior to the service. The interment will be in Memorial Park Cemetery will follow the service. Special thanks to her caregivers Mary Mitchell, Tarria Turrentine, Yulette Sparkman, Angel Turrentine, Klista Ervin, and Brittni Jones. Pall bearers will be Mike Polen, David Polen, Adam Horsley, Aaron Horsley, Jonathan Adams, and Scott Adams. Honorary pall bearers will be the staff and residents of the Bridge of Columbia. In lieu of flowers, donations can be made to Maury Regional Healthcare Foundation, 1224 Trotwood Avenue, Columbia, TN 38401 or Emmanuel United Methodist Church, 2404 Kirby Road,Memphis TN 38119.

Tommye Riggs Adams, 95, passed away peacefully in Columbia,TN on Monday, February 10, 2020.She was born in Bearden, Arkansas on August 18,1924.She was valedictorian of her high school class before doing clerical work to support the war effort... View Obituary & Service Information

The family of Mrs. Tommye Riggs Adams created this Life Tributes page to make it easy to share your memories.

Send flowers to the Adams family.