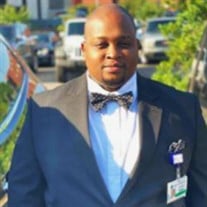 Todd Terrell Brooks was born on August 29, 1989. He invited Christ into his life on January 11, 1998 at the age of 8 under the leadership of Bro. Harold Redd at Midtown Church of Christ, and he developed a true love for the Word of God. Todd was always a very, happy, and talkative child. He grew up playing and joking with friends and family. One of his favorite past-times as a child was wrestling with his cousins. Todd attended Newberry Elementary School and Kirby Middle School. He started high school in Clarksdale, MS where he started playing football during his freshman and sophomore years at Clarksdale High School. Todd attended Bolton High School in Memphis, TN during his junior and senior years where continued playing football and started wrestling. After graduating high school, Todd enlisted in the military in 2009 where he trained with Navy Seals & ranked GM2. He received accommodations for National Defense Service Medal, Expert Pistol Shot Medal, Expert Rifleman Medal, Global War on Terrorism Service Medal, Good Conduct Medal, Sea Service Development Ribbon, and Enlisted Surface Warfare Specialists until he was honorably discharged from the United States Navy in 2013. After his service in the military, he then went back to school and obtained a bachelor’s degree in Criminology and Criminal Justice in 2017 from the University of Memphis. Todd worked for multiple security companies in Memphis while attending school for his degree. He worked as a supervisor for G4S until he was promoted to Account Manager in June 2020. Todd diligently served as an active member of Quince Church of Christ under the leadership of Bro. Nokomas Rodgers until he departed this earth. Todd leaves to cherish his loving and lifelong memories, his son Kam’Ron of Memphis TN, his mother Olandia Moses, his father Charles Sykes, Sr, his sisters Kierra Moses and Tiajovonne Sykes of Memphis, TN, Tonika Harrell of Grand Rapids, Michigan, Monica Jones of Oklahoma City, Oklahoma, Shanta’ Sykes of Ridgeland, MS; his brothers: Demedrick Morgan and Charles Sykes Jr. both of St. Paul, MN and Joshua Sykes of Marks, MS, his grandparents Leroy and Rosie Sonley of Clarksdale, MS and a host of nieces, nephews, aunts, uncles, cousins, and friends. Todd is preceded in death by his aunt, Ca’Stancia Sonley.

Todd Terrell Brooks was born on August 29, 1989. He invited Christ into his life on January 11, 1998 at the age of 8 under the leadership of Bro. Harold Redd at Midtown Church of Christ, and he developed a true love for the Word of God. Todd... View Obituary & Service Information

The family of Todd Terrell Brooks created this Life Tributes page to make it easy to share your memories.

Send flowers to the Brooks family.