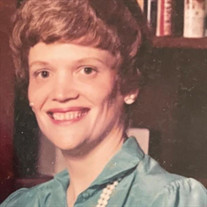 Tina Beatty McWhorter passed away peacefully the evening of December 28, 2021 at the age of 78. Tina was born on February 8, 1943 to the late Mr. and Mrs. Troy Beatty, Jr. in Memphis, Tennessee. Other than a short period of time spent in Huntsville, Alabama, she was a life-long resident of Memphis. Tina was active in sports and music in her formative years and excelled in mathematics throughout high school. She majored in economics at her alma mater, Rhodes College, and later received a master’s degree in teaching from the University of Memphis. Tina worked first at IBM, but will be remembered most fondly by her many students for the years spent teaching mathematics and computer sciences at Grace St. Luke’s School, St. Mary’s School and Hutchinson School. Following her marriage to the late, John L. McWhorter, she and John traveled extensively in the United States and Europe during which time they both developed a keen interest in the decorative arts. They were skilled collectors of early American furniture. This interest ultimately lead to Tina’s being an active supporter of the Brooks Museum to which they donated many pieces over the years. In addition to being an enthusiastic cheerleader for Trezevant Manor where she moved following the sale of her home, Tina was a generous donor, talented quilt maker, devout Memphis Tigers basketball fan, lifelong dog lover, skilled gardener and an avid student of the stock market. Tina was preceded in death by her brother, Troy Beatty, III, and is survived by her sister, Anita Beatty of Auburn, Alabama, and her nephew, Eric Price (Kristen) of Kentfield, California. Tina expressed unbounding joy in October of 2020 at the birth of her great nephew, Rowan Reid Price. Tina was grateful for the care she received at Methodist Hospice with the loving assistance of several personal care givers, most especially Whitney Thacker and Laura Smith. A Graveside Service for Mrs. McWhorter will be held in Woodridge Section (yellow arrows) on Thursday, February 3, 2022 at 12:00 pm at Memorial Park Cemetery. Memorials may be sent to The Trezevant Manor Foundation, 177 North Highland Street, Memphis, TN 38111 or Methodist Healthcare Foundation, 1211 Union Avenue, Suite 450, Memphis, TN 38104 or [email protected]

Tina Beatty McWhorter passed away peacefully the evening of December 28, 2021 at the age of 78. Tina was born on February 8, 1943 to the late Mr. and Mrs. Troy Beatty, Jr. in Memphis, Tennessee. Other than a short period of time spent in Huntsville,... View Obituary & Service Information

The family of Tina Beatty McWhorter created this Life Tributes page to make it easy to share your memories.

Tina Beatty McWhorter passed away peacefully the evening of December...

Send flowers to the McWhorter family.