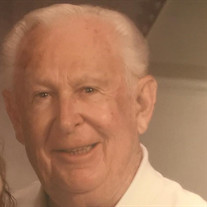 Thomas M. Garibaldi, also known as Tommy, Daddy, Uncle Tommy, and PawPaw by those who loved him the most. Tommy was born December 1, 1930, and was a life-long resident of Memphis, Tennessee, who died on December 18, 2021, at the age of 91. Tommy is survived by his wife of 70 years, Jean Clay Cox Garibaldi; his children Jack Garibaldi, Patti Wilson, Gwen Wolford, and Lynn Kirkland; 9 grandchildren; and 9 great grandchildren and one on the way. He is predeceased by his parents, Agnes C. and Andrew J. Garibaldi; his sisters, Marjorie Grosmann and Agnes Farrell, and brothers, Andrew Garibaldi and Joseph C. Garibaldi. Tommy attended St. Therese-Little Flower and graduated from Catholic High School where he was quarterback of the football team and All American shortstop. Upon completion of high school, he went to work for a wholesale jeweler, Sandown and Kendall. In 1951, he enlisted in the Air National Guard and served with the 155th Tac Recon Squadron during the Korean War. Tommy married his high school sweetheart, Jean Clay on June 28, 1952, where they resided on the Shaw AFB, South Carolina. At the end of the war, Tommy resumed his work as a jeweler. He worked for Dreifus Jewelers for 25 years until opening his own business, Garibaldi Jewelers. He was an avid golfer who played 3 times a week at Windyke Country Club. He enjoyed family vacations to Destin with the Cardosi’s and playing in the Watermelon Open. He was a loyal University of Memphis tiger fan. He loved going to Memphis football games followed by dinner at Pete and Sam’s with friends and family. When he could no longer play sports he loved watching them. The visitation is scheduled for 1:30 p.m. with Mass to follow at 2:30 p.m. on Thursday, December 23, 2021, at The Church of the Holy Spirit on Hickory Crest. Memorial Park Funeral and Cemetery has charge. The burial will be Tuesday, December 28, 2021, at 11:30 a.m. at Calvary Cemetery. Donations may be sent to The Church of the Holy Spirit or a charity of your choice.

Thomas M. Garibaldi, also known as Tommy, Daddy, Uncle Tommy, and PawPaw by those who loved him the most. Tommy was born December 1, 1930, and was a life-long resident of Memphis, Tennessee, who died on December 18, 2021, at the age of 91. Tommy... View Obituary & Service Information

The family of Thomas M. Garibaldi created this Life Tributes page to make it easy to share your memories.

Send flowers to the Garibaldi family.