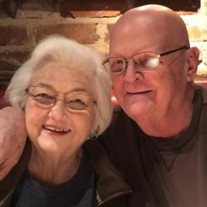 During the early morning on Thursday August 27th, Sylvia Hudson Sparkes, loving wife, mother, sister, and grandmother passed away at the age of 77 in Roswell, Georgia. Sylvia was born on October 21st, 1942 in Union City, TN. Sylvia graduated from Memphis State University with a master’s in childhood education and worked for 38 years as an elementary teacher and guidance counselor for the Memphis City Schools. On June 23rd, 1963, Sylvia married William Alvis Sparkes. They had three sons, William Matthew of Atoka, Tennessee, David (Heather) of Milton, Georgia, and John (Cory) of Apollo Beach, Florida and four grandchildren, Hudson, Nicholas, Elizabeth, and Caroline. Sylvia was a member of Colonial Park United Methodist Church and United Methodist Women. She had a passion for helping and teaching children and was active in educational organizations. She loved spending time with her sons and grandchildren and watching them develop. She was blessed with an abundance of loving friends which helped to keep her active throughout her years. Sylvia was preceded in death by her father, Harry Caldwell Hudson, and her mother, Opal Arnett Roper. She is survived by her husband, her three children, her grandchildren, her brother Dennis (Nancy) of Santa Fe, New Mexico, and several cousins. A funeral service will be held on September 2nd, 2020 at 2:30 at Memorial Park Cemetery in Memphis, TN with a visitation scheduled for 1:30. In lieu of flowers, the family ask for donations to be made to the Alzheimer’s Association or the American Heart Association.

The family of Sylvia H Sparkes created this Life Tributes page to make it easy to share your memories.

During the early morning on Thursday August 27th, Sylvia Hudson...

Send flowers to the Sparkes family.