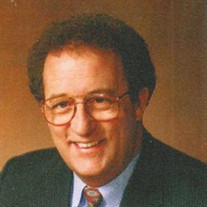 Steve Oehmen, 75, of Germantown, TN passed away at his home on Thursday evening, July 29, 2021 with his wife and sons at his bedside. Dr. Stephen Oehmen leaves behind his loving wife, Susan, of fifty-two years; son Christopher (Ann) and grandsons Luke and Ryan; son Jeremy (Stacey) and granddaughter Harper; sister Suzanne Wilson; brother Greg Oehmen; numerous nephews and nieces, dear friends, and his rescue dog Millie of 15 years who steadfastly stayed by his side. Steve was born in Chicago in 1945 to parents Gregory Joseph Oehmen and Helen Ritzinger Oehmen. His family moved to Saint Louis where he attended Bishop DuBourg High School, and after three attempts at a freshman year in college was finally successful and graduated from University of Missouri-St. Louis in 1969. While in college, he met Sue and they married shortly after they both graduated. They moved to Athens, Ohio to continue their studies and then to Chattanooga,TN and finally to Memphis where Stephen received his Doctor of Education Degree in Counseling and Personnel Services in 1981. Dr. Oehmen had, in his own words, an extraordinary life, and enjoyed a number of wonderful adventures and experiences along the way. He spent most of his professional life working with young people, either in the classroom or through the Guidance Office. He was the first Director of Counseling Services at Memphis University School, and taught special needs young people in Ohio, Chattanooga, Memphis and Arkansas. He also worked at First TN Bank and FedEx in Human Resource and Staff Development. After retiring from FedEx he returned to Guidance Counseling at Houston High School. While at FedEx, he was able to travel and see some wonderful places in the world, usually at first light having jump seated to most of his travel destinations aboard FedEx freighters. Also while at FedEx, Dr. Oehmen began (and just as quickly ended) a brief film career, virtually “starring” in a scene from “The Castaway” which nonetheless wound up on the cutting room floor. Dr. Oehmen was a published poet and writer of short stories and outdoor pieces, most often having to do with fly fishing. As was his tendency, when he got into fly fishing he went all the way “in” and took no shortcuts along the way, learning not only how to tie his own flies, but also building fly rods for his sons for their respective sixteenth birthdays and for other close friends. He earned his Private Soaring Pilot license while living in Chattanooga and eventually developed a fair amount of skill keeping a sailplane in the air when he wanted it to be. He kayaked the rivers of eastern Tennessee and northern Georgia, only after building his own kayak. Eventually he turned his spare time attention to shooting trap and, of course, could only do that competitively. Along the way in the fifteen years or so he shot, he earned local, State, and Regional championships, and one National trophy. He did not build any trap guns but of course, insisted on reloading competition trap shells to his own specifications. He always felt very lucky to have the success he did in competitive shooting. He had a darkish sense of humor. Reading the Obituaries in the local paper for example, he burst into laughter upon reading someone had died unexpectedly” because he thought to himself “too late for me to die unexpectedly. In fact, I have friends who have been wondering what’s the hold-up!” Steve did his level best to leave the world and particularly its people in better condition than he found them. This value was often represented in his volunteer work. He volunteered with the Memphis/Shelby County Juvenile Court, working first as an Auxiliary Probation Officer, supervising the probation of juvenile offenders where he rose to the rank of Deputy Chief being responsible for the development of Volunteers’ ongoing growth of leadership capabilities, ensuring that a ready pool of prepared leaders would always be available to lead the organization. Also during this time, Dr. Oehmen was a member of the Shelby County Foster Care Review Board, serving for three years as the Board’s Chairman. In retirement, Steve also volunteered at the Memphis Suicide Crisis Center for six years amassing over 700 hours of work. He loved deeply and persistently. He believed that any given situation had to be either comic or tragic, and so as often as possible, he opted for the comical view of the world. His family and friends will miss his humor, his laughter and generous heart. A Memorial Service for Steve will be held in the future. In lieu of flowers, the family has requested that people honor Dr. Oehmen's life and legacy by helping those in need with donations or volunteer service with Project Outreach of Fayette County, TN or your local food bank, animal rescue services, or other charity or service of your choice.

Steve Oehmen, 75, of Germantown, TN passed away at his home on Thursday evening, July 29, 2021 with his wife and sons at his bedside. Dr. Stephen Oehmen leaves behind his loving wife, Susan, of fifty-two years; son Christopher (Ann) and grandsons... View Obituary & Service Information

The family of Stephen John Oehmen created this Life Tributes page to make it easy to share your memories.

Steve Oehmen, 75, of Germantown, TN passed away at his home on...

Send flowers to the Oehmen family.