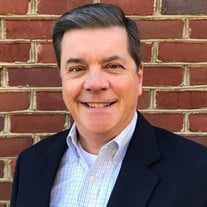 Stephen Douglas Alm, 59, passed from this life into eternal life on Monday, July 19, 2021 at the Methodist Hospice Residence. His life and his battle with cancer were characterized by steadfast faith, hope, joy, and trust in the Lord. He is survived by his beloved wife of 38 years, Nadia Alm, son and soon-to-be daughter-in-law, David Alm & Laura Wynne, daughter and son-in-law, Emily & Brian Knack, and grandson, Cooper Knack. He is also survived by his sister and brother-in-law, Carolyn & Victor Santos, and nieces and nephews, Joel Alm (wife, Megan), Elaine Alm, Carter Santos, and Kendra Santos. He is preceded in death by his father, Bernard Alm, mother, Norma Alm, and brother, Andrew Alm. Stephen was born in Toronto, Ontario on December 11, 1961 to loving parents, Bernie and Norma. He was the oldest of their three children and was blessed to be raised in a Christian home. In the summer of 1970, he surrendered his life once and for all to Jesus as Lord and Savior. From then onward, his life was transformed by the Holy Spirit and was characterized by a gentle, soft-spoken faith, humility, selflessness, and love. Stephen’s first priority was faithfully following the Lord, followed second by his unwavering commitment to his family. Stephen met Nadia in the high school youth group at Bayview Glen Church. They began dating in 1978, attended and graduated from Wheaton College together, and were married in 1983. They have two children, David and Emily. Stephen was an involved, loving husband and father. He was patient, kind, and found much joy in his family, especially his grandson Cooper. He had a great sense of humor and often had a twinkle in his eye after subtly cracking a joke. Professionally, after college, Stephen began working at the family business in tow truck manufacturing, Vulcan Equipment Company. Vulcan opened a branch in Olive Branch, Mississippi, and Stephen and his family immigrated to Memphis, Tennessee in 1990 to oversee the new location. Upon the death of his father in 1992, Stephen became the president of Vulcan at the young age of 30. With the Lord’s blessing, he led the company out of Chapter 11 and onward to great success. In 1996, Vulcan was sold to Miller Industries and is still active today. Stephen then invested in a furniture company, Contract Seating Solutions. The years with CSS (1996-2008) were filled with tremendous hardship, but God used these years to refine and strengthen Stephen. Stephen then began working alongside his brother-in-law at Victor’s company, Natureplex LLC. As he transitioned from entrepreneur to employee, Stephen began reinventing himself professionally. During the subsequent years of his career, he obtained a Master of Business Administration degree from Union University, a Master of Accountancy degree from Christian Brothers University, a Certificate in Lean Management, and a Certificate of Managerial Accounting. He was a life-time learner. Even while undergoing chemo, Stephen was working on his Six Sigma Certification. Stephen was well-loved by all – his family, friends, co-workers, neighbors, church family, and acquaintances. He was diagnosed with cancer in July 2020. Throughout his battle with cancer, his faith held firm. In his final weeks, he faced death with the same inner faith and fortitude that were the hallmarks of his life. Both his life and death inspired, encouraged, and challenged all who followed his cancer journey. He leaves an unimaginable void and is deeply missed by all who knew him. Two years ago, Stephen began writing a book titled “Glimpses of the Almighty”. His book chronicles the moments where “faith became sight” and the work of the Lord was clearly visible throughout the lives of his grandparents, parents, himself, and his wife, including Stephen’s journey with cancer. In one of the last chapters of his book, among the lessons he learned through cancer, he wrote, “For me, one of the pleasant and reassuring results from an advanced cancer diagnosis is that faith holds strong. It is steadfast, and as a result, there is absolutely no fear of death, only a longing for heaven. Cancer turned out to be the most incredible blessing. The journey transitioned from acceptance to thankfulness; from thankfulness to joy.” The family is working to finish and to print this book on his behalf. If you would like to request a copy, you can e-mail [email protected] The funeral and visitation will be held on Friday, July 23, 2021 at Grace Evangelical Church (where Stephen was a dedicated member since 2008), located at 9750 Wolf River Boulevard, Germantown, TN 38139. Visitation will be from 10am – 12pm. The funeral service will be at 12pm and will be live-streamed (https://graceevan.online.church/). A graveside service will be held afterwards at Memorial Park South Woods, located at 5485 Hacks Cross Road, Memphis, TN 38125. In lieu of flowers, donations can be made to Samaritan’s Purse or Grace Venture (the mission fund at Grace Evangelical Church).

Stephen Douglas Alm, 59, passed from this life into eternal life on Monday, July 19, 2021 at the Methodist Hospice Residence. His life and his battle with cancer were characterized by steadfast faith, hope, joy, and trust in the Lord. He is... View Obituary & Service Information

Stephen Douglas Alm, 59, passed from this life into eternal life...