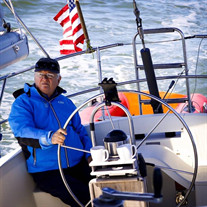 Gordon Stanton (Stan) Bryant passed away on June 21, 2021, at Baptist Memorial Hospital in Memphis, Tennessee. He was born on January 5, 1943 in Daytona Beach, Florida, and spent most of his youth in Southeast Tennessee, with family in both the Chattanooga and Pikeville areas. After graduating from Red Bank High School, Stan proudly attended Georgia Tech where he received his undergraduate degree as well as a Master of Science in Mechanical Engineering. His career first brought him to Memphis in 1976 as a plant manager for Dupont. Stan is survived by his beloved and devoted wife of 21 years, Judith Bryant, his son William Stanton Bryant (Joanne) of New York, two grandsons Elliot and Ian Bryant, a stepson, Scott Bourland, and two step-grandsons, Justin and Kyle Bourland (Laura) of the Memphis area. Stan was preceded in death by his mother, Virginia Benham, his cherished wife, Patricia, and their precious daughter, Patrice. As an engineer, Stan had a wonderful career with Dupont and International Paper which allowed him to live in various states, and work all over the world, especially in Europe and Asia, but it was his position as the General Manager of Liquid Packaging for International Paper that allowed him to return to Memphis as his permanent home. In Memphis, he became immersed in the city. Stan was a member of Leadership Memphis and served on the Board of Directors for the Alzheimer’s and Dementia Services of Memphis, Inc. Stan lived a multifaceted life. He was truly the modern-day version of the Renaissance Man. Stan loved his family and friends deeply. He relished in their joys and accomplishments. His son, William, as a Harvard-educated architect, designed two homes for Stan and Judy in the Memphis area. They were so proud of each one. Professionally, Stan was an exceptional leader who recognized the power of establishing strong relationships. He was a fabulous friend who was always present to help when he was needed the most. His strength, which allowed him to withstand the storm of great sadness and life’s challenges with grace, served as an inspiration to all who knew him. He had a brilliant mind that could not rest. He was continually listening to podcasts, reading books, and watching the news to stay abreast of current events so that he could share his thoughts in lively discussions on a wide variety of topics. He was creative. He was an accomplished artist and a fervent art collector of numerous forms of art. Additionally, he was a master at wood-working. In his treasured shop, he designed countless creations ranging from beautiful pieces of furniture to unique pens. His family and friends are grateful to have some of these Stan originals in their homes. His engineering background allowed him to fix anything, but he found great joy in restoring old cars. His life-long passion was sailing. He was not only the captain of his own sailboats, but he also passed his love of the open sea to his son, William, and to his grandsons, especially Elliot and Kyle. He loved to travel. His work allowed him to see many areas of the world, but he also had great fun traveling with his family and friends. Because of his love of the sea and beautiful scenery, he enjoyed going on cruises and seeking vacation spots near the water and in the mountains. Gordon Stanton Bryant passed away on the day of the Summer Solstice, the day of the year that offers the most daylight to parts of the world. He certainly brought an abundance of his own brilliant light and a love of life into so many lives. This world is brighter because he lived. He will be greatly missed, but always deeply loved. The family will receive relatives and friends on Tuesday, June 29 at 1:30 p.m. with a celebration of his life at 2:30 p.m. in the Fireside Chapel of Memorial Park Funeral Home, 5668 Poplar Ave, Memphis, TN, 38119. (901) 767-8930 To view the webcasted service click the link below: http://webcast.funeralvue.com/events/viewer/56327/hash:3A2C12A8F78B160B The family requests that in lieu of flowers, to please send donations in memory of Gordon Stanton Bryant to ADS, Alzheimer’s and Dementia Services of Memphis, Inc.

Gordon Stanton (Stan) Bryant passed away on June 21, 2021, at Baptist Memorial Hospital in Memphis, Tennessee. He was born on January 5, 1943 in Daytona Beach, Florida, and spent most of his youth in Southeast Tennessee, with family in both... View Obituary & Service Information