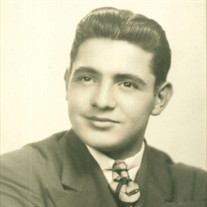 Spiros T. Angelakis passed away peacefully on July 24, 2021 at the age of 92. He would have been 93 next month. Spiros was born on August 25, 1928 in Peabody, Massachusetts, the son of Theodore and Yannoula "Jennie" Angelakis (nee. Kleros). Spiros pursued higher education at Salem University and Boston University, receiving his Bachelor's Degree and his Master's Degree in Education. During the Korean War, he was inducted into the U.S. Army Officer's program and served in public relations and communications as a First Lieutenant at Camp Breckinridge, Kentucky. He was assigned to Fort Dix for basic training followed by Fort Benning for Candidate School. After he completed the training, he was commissioned a Second Lieutenant. The first assignment he had was at Camp Breckinridge as Informational, Educational and Athletic Officer in Division Faculty. After its closure, he was sent to Fort Knox in Kentucky and then discharged as First Lieutenant. He was a patriot who deeply loved his country and was a political enthusiast into his nineties. This Massachusetts boy became a Southerner when he met a beautiful Memphis girl named Georgia. Spiros married Georgia (his wife for over 52 years) and made Memphis his home. Here he became the owner of the popular Mark Twain Cafeteria. Memphians enjoyed delicious, home-style meals for 40 years. Spiros was a gracious and generous host and countless Memphians will fondly remember not only delicious food and fellowship at the Mark Twain but also playing in the boathouse located in the center of the charming, Southern-themed restaurant. People will remember him not only for the food, but also for his big heart and his unique and caring way of relating to people. He pioneered and was even awarded recognition for his hiring of individuals with disabilities. When he wasn't at the restaurant, you could find him on the golf course. Spiros played in the Danny Thomas Open Pro Am for over 30 consecutive years and in his early days was ranked number 2 in the city. His home courses were Colonial Country Club and Chickasaw Country Club. Spiros enjoyed the sport his entire life. In his later years, his competitive spirit led him to become an avid bridge player. Spiros quick wit and charisma endeared him to many, and he will be missed by friends and family. His family takes great comfort in knowing he was a born again believer in Jesus Christ. He was raised in the Greek Orthodox Church and later became a member of Independent Presbyterian Church. He is survived by his devoted son, Ted Angelakis and his wife, Jennifer, and by his much-loved four granddaughters, Sophia, Alexis, Demi and EllaynaKate. Spiros is also survived by his loving sister "Kaye" Angelakis Nicolakis and husband Emmanuel of Ansonia, Connecticut, and his sister-in-law, Maria Luz Angelakis of Peabody. The family will receive relatives and friends on Saturday, July 31 from 9:00 am until the time of the funeral service at 10:00 am at Memorial Park Funeral Home and Cemetery, 5668 Poplar Avenue in Memphis. The committal service will immediately follow. To view the webcasted service click the link below: http://webcast.funeralvue.com/events/viewer/57640/hash:C2805E9D76849263

Spiros T. Angelakis passed away peacefully on July 24, 2021 at the age of 92. He would have been 93 next month. Spiros was born on August 25, 1928 in Peabody, Massachusetts, the son of Theodore and Yannoula "Jennie" Angelakis (nee. Kleros).... View Obituary & Service Information