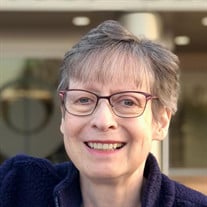 Sherri Lynn Walker Wilson was born on January 25, 1954 in Sikeston, Missouri, to Clifton Walker, a school teacher, and Hazel Walker, a registered nurse. In the early hours of January 5, 2022, after living with cancer and related health concerns for almost two decades, Sherri passed away, at the age of 67, in the arms of her husband of 46 years, Dr. Trent Wilson, at their home in Germantown, Tennessee. Sherri was the middle child of two siblings—Gary (older) and Kim (younger)—who moved around Missouri, following the parents’ work, then to Des Moines, Iowa, and, finally, to Memphis, Tennessee, where she lived most of the following years. She graduated from Overton High School in 1972 and, afterward, attended Memphis State University, graduating magna cum laude with a B.A. in English in the summer of 1975. While attending classes, Sherri met Trent, a fellow student in her Abnormal Psychology course, and the two married in December of 1975. Following her love of language and communication, Sherri soon enrolled in a graduate program at Memphis State, receiving a Masters in Speech Pathology. She began work in that field with the Shelby County school system and the disability services nonprofit Easter Seals. When Trent completed dental school in 1978, the two adopted a beloved Eskimo Spitz named Moon and moved to Biloxi, Mississippi, where he worked as a general dentist on the Air Force Base and she worked in the neighboring Pascagoula school system. In 1980, Sherri gave birth to their first son, Gary Trent, Jr., and the growing family moved back to Memphis, where Trent could complete an oral surgery residency and the two could be closer to family. Sherri began to devote her life fully to working as a mother and homemaker. In 1987, she had a second son, Eric Dean, thus completing their family. Invariably, Sherri shared an electric and infectious sense of joy with everyone she met—neighbors, those in the dental community, even strangers. She was a proud and lifelong member of the Methodist Church from birth, calling the congregation of Emmanuel United Methodist in East Memphis home for over thirty-five years. She shared a life-long love of live theater (especially Broadway musicals) and live music (particularly Elton John, Billy Joel, and The Eagles) with her close friends and loved ones. In her later years, she became fond of traveling to Napa Valley, California, to experience the wine tours and world-renowned food. Most of her years were also spent with a canine companion. Besides Moon, Sherri had lived with a dachshund named Archie as a teenager; after her sons moved out of the house, a black lab named Jada; and, finally, another lab, a rescue, named Lucy, who was at her side when she died. In 2003, Sherri was first diagnosed with cancer, undergoing strenuous treatment that sent the tumor into remission but also invited additional challenges. Through it all, Sherri never lost her lust for life or her characteristic—and sometimes unorthodox—sense of humor. She also remained strong in her faith. After ten years in remission, the cancer returned, and this time, the tumor was not able to be removed. Remarkably, Sherri survived almost a decade beyond the most optimistic predictions, and the words “miracle” and “tough” were never too far from a description of her, though Sherri often humbly rejected them. Sherri will be missed terribly by her living family: her husband, Trent Wilson; her son, Gary Wilson (Brooke) of Memphis; her son, Eric Dean Wilson of New York; and her grandsons, McCoy and Cole Wilson. A visitation with family will be held at Memorial Park Funeral Home on Monday January 10th from 5pm–7pm, and the funeral will be held at Emmanuel United Methodist Church on Tuesday January 11th at 11am. In lieu of flowers, the family requests memorials be sent to Emmanuel United Methodist Church or West Cancer Foundation. Memorial Park Funeral Home and Cemetery, 5668 Poplar Ave, Memphis, TN, 38119. (901) 767-8930

Sherri Lynn Walker Wilson was born on January 25, 1954 in Sikeston, Missouri, to Clifton Walker, a school teacher, and Hazel Walker, a registered nurse. In the early hours of January 5, 2022, after living with cancer and related health concerns... View Obituary & Service Information

The family of Sherri Lynn Walker Wilson created this Life Tributes page to make it easy to share your memories.

Send flowers to the Wilson family.