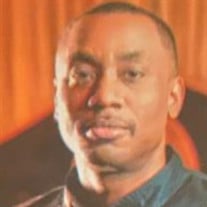 Seth Emil Harris, 44, of Memphis, TN, died Thursday, December 24, 2020. at his residence. Seth was born September 3, 1976, in Memphis, TN and was a lifelong area resident. He worked as a Managing Chef and Gospel Musician. Seth was a dedicated professional chef having honed his skills after culinary school under the tutelage of Felicia Suzzane’s, Memphis only five-star restaurant. Seth served as a managing chef for Southland Gaming of West Memphis, AR, chef de cuisine for the Guest House at Elvis Presley Hotel of Memphis, and managing chef for Gold Strike Casino of Tunica, MS. Although a perfection at his trade, Seth was unassuming and humble by nature. Seth was affable and kind and greeted everyone with a smile. Seth was a dedicated member of Dominion Living Ministries of Memphis, TN and the church pianist. Seth attended Whitehaven High School of Memphis and University of Arkansas at Pine Bluff (UAPB). Seth’s biggest and most profound legacy was the love, attention and care he gave to his family, friends, and all who were fortunate enough to know him. Seth had an extremely kind heart and impeccable manners; his heart was on the “right” side of his chest” Seth admired many people, but no one more than his mother with whom he had a special bond and remained in constant contact throughout his life. He also admired his father and attributed his love for cooking to the years they spent together in the family kitchen. Seth is survived by his parents, Ella Genara Smith Harris and Donald Ray Harris of Memphis; his brother Brian Donald Harris and wife Domeniek Harris, also of Mississippi; his niece and nephew, Briana and Jeremiah Harris whom he cherished dearly. He is also survived by his uncles, Franklin Harris, Jr. and wife Helen, Leroy Morgan and wife Diane, also of Memphis; seven aunts, Annette Harris, Frankie Harris, Patrice Scott, Angela Harris, Beverly Smith Shirley Kemp and husband Lawrence, and Diane Gholson of Memphis. He also leaves to mourn his passing his cousins Devasia, Juanise, and Gariel Lindsey, a host of friends and co-workers and best friends Keenan Shotwell and J’Arvis Harris (cousin). Lastly, he will be most missed by his loving mother and father who will keep his memory alive and love him dearly until they depart this world and join him in the afterlife. Funeral arrangements are being handled by Memorial Park Funeral Home and Cemetery at 5668 Poplar Ave., Memphis, TN from 1 to 2 p.m., Saturday, January 2, 2020, with visitation beginning at 1 p.m. to be followed by a private graveside service at 2 p.m. A limited seating memorial service will be held on Sunday, January 3, 2020 from 4 to 6 p.m. at Higher Heights, 4027 Raleigh Millington Rd., Memphis, TN. It will also be streamed live.

Seth Emil Harris, 44, of Memphis, TN, died Thursday, December 24, 2020. at his residence. Seth was born September 3, 1976, in Memphis, TN and was a lifelong area resident. He worked as a Managing Chef and Gospel Musician. Seth was a dedicated... View Obituary & Service Information

The family of Seth Emil Harris created this Life Tributes page to make it easy to share your memories.