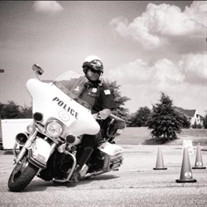 Officer Scotty Triplett of the Memphis Police Department ended his watch on May 22, 2021. Christopher Scott Triplett (Scotty) was a son of Arlington TN. In 1893 his great-great grandfather S.Y. Wilson founded the General Store that still anchors the historic Depot Square in town. His grandfather Sam T. Wilson was mayor for nearly 20 years, and his mother Susan ran the Store until 2015. Scotty’s lifelong love for the outdoors began as a boy in the country around Arlington. Scotty attended Bolton High School and was a gamewrecker on the D line. As a senior he fell in love with his soulmate, Fran. They would spend 30 years orbiting each other, married for the last 22. They built a family around Cason and Samantha. It was half a lifetime, more than many get, and not nearly enough. Fran adored Scotty. These were childhood sweethearts who fought through life’s ups & downs together to build a rare kind of love. Scotty and Fran worked hard, so they could love harder. It was a loud, fierce bond, and Fran always ensured their love embraced his family in Blue as well as the one at home. Scotty was a prolific painter and sketch artist. He loved outlaw country. But he worshipped nature, humbled himself in it, and offered his prayers there. He was on fire for the outdoors, for hunting and fishing, tracking and caretaking. He lived to share the natural world with family and friends - to usher a kid into the woods for the first time, to put a grown man on his first buck, to get some dirt under your toes, to greet the sunrise together. Whether he was at work or in the woods, Scotty wanted to feel the whole day, every last drop of it, hot and cold, rain or shine. He saw all of it as a gift and wanted you to feel it too. Like every other man or woman who puts it on, the Blue was a vital part of Scotty, but it wasn’t the whole story. He wore it for 27 years. He ran towards danger countless times. He served our City with honor. He sacrificed his one life. He took care of his brothers and sisters. He made them laugh so hard, and he showed them how to savor the whole damn day, to meet the world where it was and embrace it. Scotty is a hero because of his life, not his death. He is our hero because he was real, not ideal. Scotty had such a special touch with people. He knew no stranger. We didn’t get enough of him. We know he had so much more love to give us. But Scotty Triplett got just about everything he wanted out of this life, and he did it on his terms. Motor Up. Scotty is survived by his wife Fran, their son Cason Scott Triplett, 18 and daughter Samantha Autumn Triplett, 12. By his parents, Susan & Mark Hoggard and Mike Triplett. By his brother-in-law Wilson Baird (Mollie), nephew Will and niece Lizzie. By Aunts, Uncles and many cousins. The family will receive friends from 3:00 p.m. until 6:30 p.m. Thursday, May 27 at Hope Church. Memphis Police Dept. has organized a Sea of Blue to depart Hope Church and travel though the city to pay tribute at 7:30 p.m. His funeral service will be at 11:00 a.m. Friday, May 28 at Hope Church with burial to follow at Arlington Cemetery, Arlington, TN where full honors will be rendered. Memorials may be made to Memphis Police Association Charitable Foundation 901-523-7075 https://www.facebook.com/donate/521934155488651/?fundraiser_source=external_url or to Hunters For The Hungry https://hfth.nra.org/. Arrangements have been entrusted to Memorial Park Funeral Home and Cemetery, 5668 Poplar Ave, Memphis, TN 38119, 901-767-8930..."A Fitting Farewell for Everyone" Click the link below to view the tribute slideshow: https://www.tributeslides.com/tributes/show/8YJXYYD8ZFL4W5ZQ

Officer Scotty Triplett of the Memphis Police Department ended his watch on May 22, 2021. Christopher Scott Triplett (Scotty) was a son of Arlington TN. In 1893 his great-great grandfather S.Y. Wilson founded the General Store that still anchors... View Obituary & Service Information