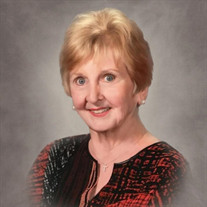 Sara Tanksley Savell, 82, of Memphis, Tennessee, passed away on Sunday, August 1, 2021. She was preceded in death by her husband, Las Savell; her parents, Rev. James E. Tanksley and Louise Edwards Tanksley; and a sister, Melinda Guess. Sara Savell’s varied and impressive career spans both the arts and education. From a young age, Sara displayed a love for singing and performing. Born in Nashville, her family moved to Bartlett, Tennessee where she attended both Bartlett Elementary and Bartlett High School. She went on to receive a bachelor of arts in music education and a master of arts in music performance from Memphis State University, now University of Memphis. Sara also studied abroad in Sienna, Italy, at the Academia Musicale Chigiana. Upon her return to Memphis, she was named the winner of the Metropolitan Opera regional auditions and advanced to the finals in New York City. During the early part of her performing arts career, she was a soloist with the Memphis and Jackson Orchestras and sang the soprano roles in Hayden's Creation with the Dallas Symphony. She was a resident member of the Memphis Opera Theatre (now known as Opera Memphis), where she played many leading roles. Along with her husband Las, she performed in productions at the Memphis Little Theatre, located in the Pink Palace Museum. In 1966, Sara was featured as Hope Harcourt in a production of Anything Goes. In addition to her operatic and theatrical pursuits, Ms. Savell worked thirty years in the legacy Shelby County School system. The last fifteen years of her teaching career were spent at Germantown High School on the faculty of its internationally-known fine arts department, where she originated the award-winning choral music department. Her choirs consistently won local, state, and national honors and were selected as one of the state's Tennessee Outstanding Performing Student (TOPS) choirs, Her students and choirs often performed with the Memphis Youth Symphony Orchestra. Constantly in demand as a music adjudicator and clinician, Sara served as regional director of vocal auditions for the Tennessee Governor's School of the Arts. Many of her students advanced to professional careers in music and the arts and include such notables as Saturday Night Live star Chris Parnell; film, television and stage actress Missi Pyle; local Memphis music legend Susan Marshall, Blue Man Group actor Wes Day, and Tennessee Shakespeare Company artistic director Dan McCleary. Sara served as musical director and co-director for more than twenty musical productions at Germantown High School’s Poplar Pike Playhouse. Along with her long-time colleague and collaborator Frank Bluestein, she co-wrote and produced the original touring production of Music! Broadway! America!, which appeared in venues throughout the mid-south and which was invited to be the opening night main stage production at the 1980 International Thespian Festival in Muncie, Indiana. In 1983, Savell and Bluestein directed the first area production of Joseph and the Amazing Technicolor Dreamcoat, which was also invited to be the showcase production at the 1983 International Thespian Festival. Sara conducted the Germantown Community Chorus for two years and continued to perform professionally in a variety of productions, including solos for the United States-People's Republic of China Cultural Arts Exchange program; the Germantown Arts Commission Concert; and Poulenc's Gloria, held at Saint George's Episcopal Church in conjunction with the Germantown Symphony Orchestra. In 1987, she co-authored and starred in a musical revue with her former student Susan Marshall, entitled Sara and Susan in Concert. The Germantown High School Fine Arts Department named Sara as its 1992 award winner and honored her with a special evening titled Salute to Sara: Thirty Years of Musical Memories. Hundreds of students, alumni, colleagues, and friends attended the event. Sara served as a regional site visitor for the Rockefeller Brothers Fund. She was also chosen as one of only twenty individuals nationwide to participate in the Rockefeller Brothers Fund Boston, Massachusetts arts educator summit, where she and pianist Ellis Marsalis Jr. (father of Branford and Wynton) entertained the other attendees with their own special version of Summertime. She was a past president and long-time board member of the Beethoven Club of Memphis, which for many years sponsored the Las and Sara Savell vocal competition. This contest provided financial awards and professional encouragement to singers between the ages of nineteen and twenty-eight from Arkansas, Mississippi, and Tennessee. After retiring from education, Sara returned to her Memphis Little Theatre roots and served as music director for a number of productions at Theatre Memphis. She was also an active board member of the Tennessee Arts Academy Foundation, which serves as the support arm for the Tennessee Arts Academy, a statewide professional development institute that trains K–12 arts teachers annually in Nashville on the Belmont University campus. In Memphis, she served on the board of the Tennessee Shakespeare Company for many years, supporting her former student Dan McCleary, who founded the organization. In 1994, Sara was presented with a Germantown Arts Alliance Award for Excellence in the Performing Arts. For more than thirty years, Sara and her husband Las were the popular co-owners of Las Savell Jewelry in Memphis. Their store, situated near the corner of Union and McLean, attracted a large and devoted customer base. Sara Savell is survived by her daughter, Amy Savell, and three nieces, Phyllis Sherman, Denise Strickland Cates and Rhonda Scott. A private graveside service for the family will be held at Memorial Park Cemetery, 5668 Poplar Avenue in Memphis. Memorial contributions may be made to The Church Health Center; Lindenwood Christian Church; The Beethoven Club of Memphis, Tennessee Shakespeare Company; Tennessee Arts Academy; or a charity of the donor’s choice. Sarah's celebration of life will be held Saturday, November 20, 2021 at 1:30pm, at Lindenwood Christian Church.