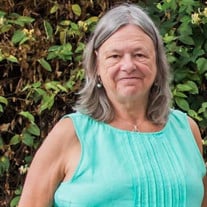 Sandra Sharon Bull Marion, age 71, a resident of Cordova, TN, passed away on 1 January 2021 from a brief but devastating illness. Sandy was born 5 March 1949 in Patterson, NJ. Her parents were Edna Earl Roebuck and William Robert Bull. Sandy graduated from Hamilton High School in Hamilton township, NJ, and received an Associate’s degree from Bryant College, Providence, RI, now a part of Brown University. After working for the ADR software development company in Princeton, NJ for several years, she moved to Winston-Salem, NC to be near family and met her husband Tony, at the Bowman Gray School of Medicine. The two were married in the Wake Forest University Reynolda Gardens in 1977. Sandy and Tony moved from Winston-Salem to Birmingham, AL the same year where she was employed as a Research Business Manager at the University of Alabama, Birmingham and later after moving to New Haven, CT, the Howard Hughes Medical Institute at Yale University Medical School. Sandy moved to Memphis in 1987 with her husband Tony who had accepted a faculty position at what is now the University of Tennessee Health Science Center. Being frustrated with job offerings limited to secretarial positions after her high-level appointment at Yale, Sandy attended Memphis State University to receive a BA in Professional Studies in 1991. She continued her studies at the University of Memphis and received a MA in Sociology in 1994. She was inducted into the Phi Kappa Phi Honor Society in 1994 and the Alpha Kappa Delta International Sociology Honor Society in 1993. Sandy subsequently held research administration positions at St. Jude Children’s Research Hospital and the University of Tennessee Health Science Center until retirement in 2004 at which time she became a potter. Her whimsical creations were a regular feature at local farmers’ markets, festivals, and artisan fairs. Sandy loved everything aquatic, in and on the water. She loved the beach and was always happiest sitting at the shoreline reading. She was also attached to animals, so anyone visiting the Marion household had to endure friendly cats, dogs, and parrots. Immediately after moving into her home in Cordova, she had the backyard registered as a wildlife sanctuary. Sandy is survived by her husband of 43 years Tony Norman Marion, son, Zachary Harrison (Sarah Flanagan), age 39, of Christchurch, New Zealand, and daughter Stephanie Michele, age 37, of Cordova, TN. No in-person viewing or memorial services are planned. A virtual memorial for friends and family will be arranged at a later date. Memorials in Sandy’s name may be submitted to the Cancer research organization of choice.

The family of Sandra Marion created this Life Tributes page to make it easy to share your memories.

Send flowers to the Marion family.