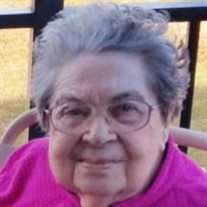 Ruby Floyd Currid was born on June 9, 1927 to John Smith Floyd and Charlotte Nelson Floyd near Crenshaw, MS. The Lord took her home on February 6, 2021. Ruby attended elementary and junior high school at Coleman School in Longtown, MS. She later attended Northwest Mississippi Junior College in Senatobia, MS for extra credit which allowed her to graduate early from Crenshaw High School in 1945. Ruby left home and began working at Sears Roebuck in the catalog department in Memphis, TN. She was a devoted employee at Sears for over 30 years until her retirement. Ruby met the love of her life, Wilfred Currid in 1949 at a USO event in Memphis, TN at the Claridge Hotel. They were married in 1950 in Hernando, MS. Shirley Washam and Aubrey Floyd were attendants at their wedding. Ruby’s husband, Bill was a chief naval officer and instructor at the Millington Naval Base. The couple had a wonderful honeymoon in the Smoky Mountains in east TN. They shared so much in common enjoying each other’s company in addition to traveling overseas to Norway, Denmark, and Sweden. Ruby and Bill also enjoyed trips to Maine where Bill had a large family. Ruby and Bill were married for 46 years until the Lord took her devoted husband away in 1996 after a long illness. Ruby bought a new home in Cordova, TN and lived there many years following his death. Ruby Currid was a devoted Christian and loved her Lord and Savior. She was predeceased by three brothers, John Smith Floyd, Sam Porter Floyd and Aubrey Sterling Floyd. She is survived by Steven Floyd, nephew and devoted caregiver, Debbie Ford, niece, Kathy Morgan, niece, and Bonnie Currid, niece. A service celebrating her life will be held on Wednesday, February 10, 2021 at Memorial Park Funeral Home, 5668 Poplar Avenue, Memphis, TN at 2:00 pm. Her service will be live-streamed at memorialparkonline.com Family and friends are invited at 1:00 pm for visitation. Graveside service will be held at 3:00 pm. Donations may be made in memory of Ruby Currid to St. Jude Children’s Hospital or to the charity of the donor’s choice. Those who are unable to attend the service, please follow the link.http://webcast.funeralvue.com/events/viewer/47711 Due to a technical difficulty the service did not broadcast live. We are working on getting it fixed.

The family of Ruby F Currid created this Life Tributes page to make it easy to share your memories.

Send flowers to the Currid family.