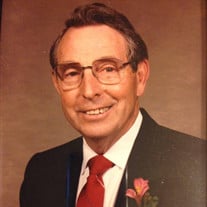 Roger Lee Richards of Batesville, Mississippi went peacefully home to be with his Savior on March 28th, 2021 at the age of 98. Born in Brownsville, Tennessee, he served in the US Naval Air Force during World War II. He attended Moody Bible Institute in Chicago, Illinois; Northwestern College in Minneapols, Minnesota; Southwestern Seminary in Fort Worth, Texas and New Orleans Baptist Seminary in New Orleans, Louisiana. "Brother Richards" as he was lovingly called, entered the ministry at the age of 22 and retired after 63 years in the pulpit. He pastored First Baptist Church, Rochester, Minnesota; Pershing Avenue Baptist Church, Memphis, Tennessee; Napoleon Avenue Baptist Church, New Orleans, Louisiana; First Baptist Church, Kenner, Louisiana; First Baptist Church, Pineville, Louisiana; Merton Avenue Baptist Church, Memphis, Tennessee; Highland Heights Baptist Church, Memphis, Tennessee, and Pope Baptist Church, Pope, Mississippi. His service to his country was in the Chaplain Corps. He was stationed in England and was honorably discharged as a petty officer 2nd class in 1945. His wife, Betty Richards of Rochester, Minnesota, preceded him in death on February 25th 2011. He is survived by his three children, Gary Richards of Wingate, North Carolina; Jan Starring and husband Malcolm of Littleton, New Hampshire; Alan Richards and wife Ruth of Arlington, Tennessee; and one sister, Grace Hendren of Batesville, Mississippi. He will be lovingly remembered by his eight grandchildren and 14 great-grandchildren as well as many nephews, nieces and all who knew him. He was a people-loving, joyous person who started each day with a prayer of gratitude and praise to the Lord Jesus who saved him and saw him through every difficulty. He has shown us what it looks like to "grow old gracefully" and we look forward to meeting him again in glory. A celebration of Roger's life will be held on Saturday, April 3rd, 11:00 am at Memorial Park Funeral Home and Cemetery, 5668 Poplar Avenue, Memphis, Tennessee. There will be visitation before the service beginning at 10:00 a.m. To view the webcasted service click the link below: http://webcast.funeralvue.com/events/viewer/51348 In lieu of flowers please send memorial donations to the Honduras Mission Project, Pope Baptist Church, 264 Front Street, Pope, Mississippi 38658.

Roger Lee Richards of Batesville, Mississippi went peacefully home to be with his Savior on March 28th, 2021 at the age of 98. Born in Brownsville, Tennessee, he served in the US Naval Air Force during World War II. He attended Moody Bible... View Obituary & Service Information