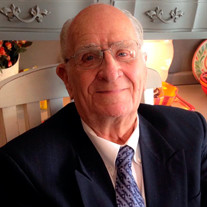 Robert “Bob” Clarence Laman, of Memphis, Tennessee, went Home to be with his Lord and Savior Jesus Christ on July 31. A private graveside service will be held on August 4th. Memorial Park Funeral Home has charge. Bob was born on September 8, 1926 in Warsaw, New York, the son of Reverend Clarence and Bernice Laman. He grew up in Auburn, New York and attended college in New York City. There he met his wife, Sara Elaine, where they both attended National Bible Institute. He also attended Hope College and later Faith Theological Seminary. They were married in 1948 in her hometown of Charlotte, North Carolina and were married for 70 years until her passing in March of 2019. As a couple they lived in Holland, Michigan; Charlotte, North Carolina; Philadelphia, Pennsylvania; Jacksonville, Florida and Memphis. The family moved to Memphis in 1974. Bob was in ministry on staff at Faith Theological Seminary in Elkins Park, Pennsylvania and as a Presbyterian pastor for many years. He later worked in the restaurant industry as a manager and trainer and also in senior adult ministries. He and his wife were faithful members at First Evangelical Church and had a special heart for missions. Bob had many wonderful gifts and talents and in his 70’s became a stained glass artisan creating many beautiful pieces of art and jewelry. He taught countless people in his classes at the church and Hobby Lobby. He was a classically trained violinist and delighted everyone with his musical abilities. He and Sara Elaine performed as a violin and piano duo for many functions throughout the years. They had a special fondness for Christmas and it brought them joy to entertain during the season including decorating every room of their home with beautiful Christmas trees. He was a dear and loving Father, Grandfather and Great-Grandfather. Survivors include their four children, David Laman; Carole Laman Martin and husband Charles; Jon Laman and wife Deborah; Joyce Laman Spiecha and husband Rob; seven grandchildren Ali Scott and husband Eddie; Jonathan Laman and wife Andrea; Jennifer Russo and husband Michael; Owen Millard, Sara Millard, Emily Laman and Holden Laman. He leaves six great-grandchildren Sofia and Jacob; Margo and Jack; and Skylar and Gabriel. Children by heart are Grace Seay, Carol Hindle, and Dr. Philip Sardar and their families. Special thanks to our family friend Laura Cline for her loving care through the years. Special thanks also to our friends at Springhouse Village Collierville for their loving care and to Lynne and the staff at Baptist Trinity Hospice. Memorials in his honor may be directed to Lar Foundation to benefit the work of Lar Batista orphanage in Brazil and Westminster Biblical Mission to benefit their work in Lahore, Pakistan. The address for Lar Batista is Lar Foundation, P.O. Box 1477, Cordova, TN 38188. The address for Westminster Biblical Mission is Westminster Biblical Mission Attn: Pakistan – Lahore, P.O. Box 212, Rising Sun, Maryland 21911.

Robert &#8220;Bob&#8221; Clarence Laman, of Memphis, Tennessee, went Home to be with his Lord and Savior Jesus Christ on July 31. A private graveside service will be held on August 4th. Memorial Park Funeral Home has charge. Bob was born on... View Obituary & Service Information

The family of Robert C Laman created this Life Tributes page to make it easy to share your memories.

Send flowers to the Laman family.