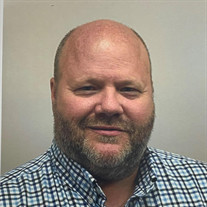 Robert Joseph Harkey 55 of Nesbit Ms. passed away on October 6,2021. A funeral service will be held on Friday October 15,2021 at 1:00 PM at Memorial Park Funeral Home. Mr. Harkey was born on December 10,1965 in Phoenix Arizona to Natalie Chambers and Robert Harkey. He had a diverse work history throughout his life. He worked for the US Postal service delivering mail in Arizona, he traveled around working on pipelines, then attended Embry-Riddle Aeronautical University in Prescott where he began his career. He not only learned to fly and got his pilots license he also taught flying lessons. He worked for Airbus in Miami Springs Florida, where he completed his education and graduated from Embry-Riddle with a degree of Master of Aeronautical Science, before moving to Memphis to start his career with FedEx. He become a manager for FedEx Flight Simulation Department where he worked for over 10 years. He is survived in death by his wife Christy Mays Harkey who he married in 2014 and became a wonderful (step)father to Corbin and Kaden Arendale and then later that year had a beautiful daughter Larkin EverlyRose. He is survived by his Mother Natalie Chambers (her husband Harold Hunsacker) his father Robert Harkey(his wife Jane Harkey)He also left a sister Caroline Di Re his partner in crime! His nephew Eric Di Re,his wife Kristen and their daughter Olivia and soon to be born baby. His niece Monique Di Re and her daughter Henley, niece ,Jessica Di Re and her fiancé Cody Grant, father in law J.K. Mays , a brother and sister in law Ken and Anita Mays and niece Kathryn Mays. He helped raise his nephew and nieces and loved them fiercely! He was a loving, dedicated and loyal family man, husband, daddy, friend and boss and will be missed by all that knew and loved him. The family will receive friends on Thursday October 14 between 5PM and 7 PM and will resume Friday October 15 from noon until the time of service at 1PM.

Robert Joseph Harkey 55 of Nesbit Ms. passed away on October 6,2021. A funeral service will be held on Friday October 15,2021 at 1:00 PM at Memorial Park Funeral Home. Mr. Harkey was born on December 10,1965 in Phoenix Arizona to Natalie Chambers... View Obituary & Service Information

The family of Robert Joseph Harkey created this Life Tributes page to make it easy to share your memories.

Robert Joseph Harkey 55 of Nesbit Ms. passed away on October...

Send flowers to the Harkey family.