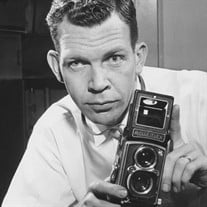 Robert “Bob” H. Williams, 96, went to be with our Lord on Wednesday, March 17, 2021. He was born to Lee Terry and Katherine Weigel Williams on August 2, 1924 in Amite, Louisiana, one of four children. When Bob was a teenager, his mother leased space to a friend for a photo lab and finishing plant. He was introduced to what he often called, “the miracle of photography.” The new passion eventually landed him a portrait photography position in Memphis, Tennessee. In 1942, he attended the Army Air Corps Photography School in Denver, Colorado. After graduation he was assigned to the U.S. Air Forces 121st Liaison Squadron. He served the Country he loved and cultivated deep friendships with fellow patriots, with whom he enjoyed reconnecting at reunions through the years. When the war ended, Bob returned to Memphis and honed his photography skills at his own portrait studio, while waiting for a job opening at the Commercial Appeal. His patience paid off. He was soon making a name for himself as a staff photographer. Impactful news photos and creative “feature pictures” captured the hearts and minds of readers. However, it was his wife, Jo, who captured his own heart and mind. He met Mary Jo on a photo assignment: “Take a picture of a pretty girl standing under a blooming dogwood tree, announcing the arrival of spring.” In December, they celebrated their 70th Wedding Anniversary. In 1955, Bob freelanced a job making pictures of a new singer by the name of Elvis, establishing a friendship with the Presley family, and providing a front row seat to the rise of the young star for the next 16-years. The opportunity to capture behind-the-scenes moments gifted Elvis fans with many iconic pictures, including Elvis’ private time at home with family, Presley’s proud moment in front of the gates at Graceland, with his Rolls Royce, his return from the Army, the birth of Lisa Marie, and the beloved photo of him kissing his mother on the cheek the night before he departed for Fort Chaffee. Another freelance job, this one for Holiday Inns, lead to a long friendship with its founder, Kemmons Wilson. Bob and Jo traveled as his guests; Bob making pictures used to market the hotel’s newest additions to the chain. The working vacations allowed Bob and Jo to see more of the United States and enjoy treasured trips to Holland and North Africa. Bob ultimately became Picture Editor at the Commercial Appeal. Through his career, he photographed many presidents, countless celebrities, the civil rights struggle and Memphis and Mid-South history, but it was his pictures showing everyday life through his camera, which were his most gratifying. When his son, David, was born, Bob made daily pictures of him for one year. Life Magazine published all 365 photographs. His younger daughter, Kristin, inspired another series. He purchased an adult one-piece swimsuit, and from infant to age 16, he photographed her in it every year until it was a perfect fit. People Magazine published the series and republished it 10-years later in an Anniversary Issue showcasing their readers’ most loved stories of the decade. Bob’s work won countless awards and reached every corner of the world. In 2016, he was the cover story of Memphis Magazine’s Faces and Places issue, featuring his 40-years of photojournalism. Several Photography Exhibits in his honor showcased his best-of-the-best shots, along with his prized camera collection. His pictures remain on display at the Civil Rights Museum and at Graceland. Bob retired after 33-years, but continued to make appearances in the newspaper with regular reruns of his memorable photographs, and his frequent “Letters to the Editor,” on important issues of the day. He served as a deacon at Germantown Baptist Church, and for over a decade, his sincere smile and hearty handshake greeted members and visitors as they arrived for the Sunday morning service. He and Jo were members of the Merrymaker’s choir, performing in venues across Memphis. Bob lived a perfect love story with his bride, was a much-loved husband and father, an incredible grandfather, a gifted joke-teller, a faithful friend to many, and a perfect gentleman. He could refurbish old houses into homes and broken furniture into treasured keepsakes. He never passed up a bowl of ice cream. He didn’t have much spare time, but on one memorable day at Riverside, some of his best buddies cheered as he made a hole-in-one. Along with his incredible talent as a photographer, he was also a gifted writer. His harmonica rendition of “Oh, Susanna” could often be heard down the halls of Kirby Pines Retirement Community, where he lived with Jo for the past six-years. He leaves behind his proud children, David R. Williams (Penney) Memphis, Paula C. Hartley (Clay) Tulsa, OK, Kristin Ammons (Doug) Shelby Forest, TN and, four grandchildren, Judson Crowe, Owasso, OK, Katelyn Barnett, (Adam) Greenville, SC, Alexander Crowe, (Carly) St. Petersburg, FL and Ellery Ammons, Washington, DC, and a step-grandaughter, Lindsay Tahaney, (Afton, OK) who will all cherish memories of our beloved “B-Bob” and his B-Bob dance. He also leaves loyal and loving caregivers; Clara, Yolanda, Tabatha, Janice, Jackie, Helen and Ricky, to whom we are so grateful. Visitation will be at Memorial Park Funeral Home, from 11:30 a.m. until the service at 1 p.m. with a private graveside service at 2:00 p.m. In lieu of flowers, please consider a contribution to Samaritan’s Purse, PO Box 3000, Boone, NO, 28607. We thank You, heavenly Father for giving us B-Bob, until in Your timing, you took him home. Please tell him we love and miss him, and we will see him again. To view the online memorial tribute video. Please click the link below. https://www.tributeslides.com/tributes/show/PDCG94GBQ6LQ93JG To view the featured article in the Commercial Appeal about Mr. Williams. Please click the link below. https://www.commercialappeal.com/story/news/local/2021/03/17/bob-williams-obit-photographer-elvis-commercial-appeal/4741175001/ To watch the service online. Click the link below. http://webcast.funeralvue.com/events/viewer/50561

The family of Robert H. "Bob" Williams created this Life Tributes page to make it easy to share your memories.

Send flowers to the Williams family.