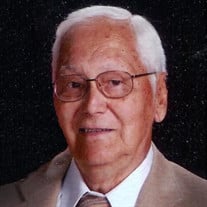 Robert Francis (Bob) Averwater, age 94, of Lakeland, TN passed away peacefully Wednesday, Feb. 26 after a twenty-year battle with prostate cancer. Born Jan 10, 1926 to Milford & Ann (Kieffer) Averwater of Memphis, Bob attended Christian Brothers High School where he played in the band, Southwestern College, and Memphis State University. He served two and a half years in the Navy on Guam during WWII. He married Joan Sinclair Rooney August 20, 1949. Bob spent his career at Amro Music Stores which his father founded in 1921 and served as its president for 15 years. Many of his friends were from the music teaching community. He and his wife, Joan were part of the founding parishioners of Church of Ascension in Raleigh. He was an avid fisherman and hunter, especially with his four sons, and later in life enjoyed just watching wildlife. He knew every bird and its call, all the animals and their habits, and maintained a farm in Haywood County mostly for the animals. Surviving family members include his wife of 70 years, Joan Sinclair Rooney Averwater, four sons, Chip (Jan) Averwater of Lakeland, Chuck (Nancy) Averwater of Collierville, Jim Averwater of Murfreesboro, Pat (D’Ann) Averwater of Lakeland, and eight grandchildren, C J (Heather) Averwater, Robbie Averwater, Lee Averwater, Nick (Ashley) Averwater, Briana (Max) Appleton, Jami (Andrew Nelson) Averwater, Taylor (Laura) Day, and Colby Day, and 5 great grandchildren. Visitation will be held 2-4 pm, Saturday, Feb 29 at Memorial Park Funeral Home at 5668 Poplar, followed by a celebration of his life at 4. In lieu of flowers, memorial contributions may be made to Centers for Good Grief, Baptist Trinity Hospice, 350 N Humphreys, Memphis TN 38120, https://baptistgriefcenters.org Please visit www.memorialparkonline.com to send electronic condolences to the Averwater family.

The family of Robert Francis Averwater Sr created this Life Tributes page to make it easy to share your memories.

Send flowers to the Averwater family.