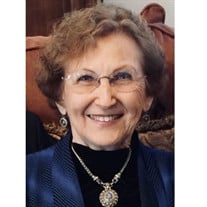 Robbye Jean Stovall Hay passed away peacefully Sunday, November 22, after a brief illness. Robbye was born November 12, 1931 in Hot Springs, Arkansas, the youngest of six children. She married Edward Neil Hay (Neil) on October 8, 1953 in Whitehaven, TN and they settled in East Memphis. Together, they had four children (in five years!) and enjoyed a long, loving union until his passing in 2009. Robbye is loved by families across Memphis thanks to her long career as the Guidance Secretary at Briarcrest Christian School, where she served from 1974 until her retirement in 1992. Robbye loved her church family at Woodland Presbyterian Church and later First Evangelical Church, enjoyed leading a Bible Study for many years, and was a member of the Bunco Babes group since 1953! She is predeceased by her husband, Neil, and her oldest daughter, Lisa Ann Hay McMinn (1993). She leaves her sons Jeffrey Neil Hay (Dana), Barry Brooks Hay (April), and daughter Tina Marie Clarke (Marty). She also leaves seven grandchildren, Preston Hay, Christine Hay, Katelyn Moshier, Brooke Ann Clarke, Brooks Hay, Delaney Hay, Lawson Hay and one great-grandson, Wyatt Dunham. In lieu of flowers, the family requests donations to the Neighborhood Christian Centers or the charity of your choice. The funeral will be held on Friday, November 27, 2020 at 11:00 am at Memorial Park Funeral Home and Cemetery, 5668 Poplar Avenue in Memphis. The committal will immediately follow. For those that cannot attend, the funeral will be webcasted and available to watch for the following ninety days. Click on the following link below to view the webcasting: http://webcast.funeralvue.com/events/viewer/41384