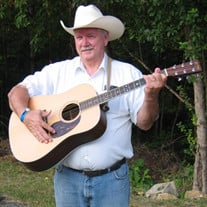 Richard John Saylor, 80, of Lakeland, TN and formerly of Forks Township, Easton, PA, passed away on September 12, 2020 at his home surrounded by family due to complications from Parkinson’s disease. He was born in Lower Mount Bethel, PA, on August 15, 1940, son of the late John and Marion Saylor. A graduate of Easton Area High School and Veteran who served as a Radioman, in the United States Navy, married the Love of his Life, Ruth (Lobert) Saylor on October 5, 1963, was a long-time resident of Forks Township and truck driver for Preston Trucking until he retired. Known as “Dick” to his friends and family, he had a passion for Bluegrass music, writing songs, playing with the Bluegrass Countrymen and releasing several CDs of his original music as Dick Saylor and Friends. He was also a long time WDVR-FM DJ for the Bluegrass Junction radio show. He is survived by his two sons, Jack and James Saylor and daughter Jill Klobe. He is also survived by 4 grandchildren, Maia Cody, Cadet Lieutenant James Saylor, Annalise and Lorelei Klobe, a Sister, Elizabeth Pirelli and Brother, Arthur Saylor. In addition to his wife Ruth, he was predeceased by his Sister Barbra. Due to COVID-19 restrictions, a memorial in Easton, PA will be planned for a later date to allow family and friends to celebrate Dick Saylor’s life and gather together to pay respects. In lieu of flowers, family requests memorial donations be made to any of the following organizations: Parkinson’s Foundation (www.parkinson.org), Michael J. Fox Foundation (www.michaeljfox.org), or Alzheimer’s Association (www.ALZ.org). “It’s so sad we must say good-bye for today, it really has been a pleasure playing for you. We want to thank you everyone, it really has been fun. We hope you enjoyed the songs we played for you. But all things come to an end, we’ll see you soon again, And in the meantime, may God bless you.” - Dick Saylor Lyrics for final song lead in to the Orange Blossom Special

Richard John Saylor, 80, of Lakeland, TN and formerly of Forks Township, Easton, PA, passed away on September 12, 2020 at his home surrounded by family due to complications from Parkinson&#8217;s disease. He was born in Lower Mount Bethel, PA,... View Obituary & Service Information

The family of Richard J. Saylor created this Life Tributes page to make it easy to share your memories.

Richard John Saylor, 80, of Lakeland, TN and formerly of Forks...

Send flowers to the Saylor family.