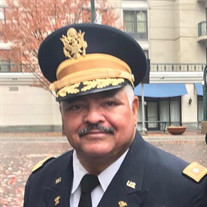 On March 15, 1953, in Sumter, South Carolina, Viola Moses Heyward and George W. Heyward were happy to welcome a son to their family. His parents were astonished to learn that they were doubly blessed and were now the parents of twin boys. Randy Ronard Heyward was the youngest of the twins. His parents along with his sister, Shirley Heyward Gray and Gloria E Heyward preceded him in death. Colonel Heyward grew up in Sumter, South Carolina surrounded by supportive, caring and very decent family and neighbors. He was the son of school teachers and grandson of Paul Moses and Mamie Dwyer Moses and of Julian Henry Heyward, Sr. and Lue Hutlin Heyward. He was always a pleasant child, popular with his family and other people in his life. Having been born shortly after World War II, he was surrounded and influenced by men of military experience. Among the many he admired were his uncles, Raymond Moses (Navy), James O. Heyward, Sr (Army), Robert Culbreath (Air Force), Leonard Lewis (Air Force), Julian Heyward, Jr. (Army) and Samuel Heyward (Army). As he sometimes reminded family members later in life, by the age of six, he had already decided he wanted a career in the military. So, quite naturally, ROTC was an integral part of his college experience. In addition to ROTC, Colonel Heyward was a proud member of Alpha Phi Alpha Fraternity. After graduating from South Carolina State University, Randy was commissioned Second Lieutenant in the United States Army. However, before reporting to his first duty assignment, he married the love of his life and college sweetheart, Cynthia Thomas Heyward. He discovered what true happiness was when they were bless with three wonderful children, Randy R Heyward, Jr., Crystal Denise Heyward and Ryan Timothy Heyward. Anyone who talked with the Colonel (as his wife affectionately called him) for a minute, knew how proud he was of his granddaughter, Reyana Heyward. Randy served honorably in the military for many years. His career began as a 2nd Lt at Headquarters 504 infantry battalion, Fort Bragg, NC. He was promoted to 1st LT as a valuable member of the Devil Brigade, 82 Airborne Division. After his promotion to Captain, Randy Heyward was assigned to US Military Personnel Center in Korea. Later he served as Company Commander of HHC 1st/31st Infantry, APO San Francisco. On July 1, 1985, Randy Heyward was promoted to Major and proceeded to a permanent change of station, Unites States Army Special Operations, Fort Bragg, N.C. Randy Heyward was promoted to Lieutenant Colonel, October 18, 1990 while commanding the 528th Support Battalion (Airborne), Fort Bragg, NC. On February 16, 1991 he was reassigned to Dhahran, Saudi Arabia and he returned to Fort Bragg May 1991. Over his vast career, from 1978-1996, Colonel Heyward received many honors, awards and medals for his outstanding service as he advanced through the ranks from Second Lieutenant, to First Lieutenant to Captain, to Major and finally Lieutenant Colonel at a rapid speed very uncommon in the military. Some of the awards, medals and recognition he received were: The Army Commendation Medal, The Army Commendation Medal First Oak Leaf Medal, Infantry, U.S. Army, August 1983, Achievement Medal, January 1984, Meritorious Service Medal, October 1986 and 1989, Army Achievement Medal 1988, The Bronze Star Medal, 1991 and the Meritorious Service Medal, 1994. Colonel Heyward retired from active duty in 1996. He moved to Memphis, Tennessee and became the ROTC instructor for Shelby County Schools and later the Director of the Army ROTC. He retired from this position May 2017. He leaves to laugh, love and cherish his memory those who brought so much joy to his life, his loving wife, Cynthia Thomas Heyward, his daughter Crystal D Heyward, two sons, Randy R Heyward, Jr and Ryan Timothy Heyward, his granddaughter, Reyana Heyward, one brother, W Rowland Heyward, three nieces, Samantha Gray Mickens (Tony), Karen Hubbard, Kenya Hubbard, two nephews, Charlie Tucker, and Justin Tucker, one aunt, Florence Moses Culbreath (Robert), one uncle, James O Heyward (Col Ret) (Willie Mae), Henry Heyward, Jr., a step mother, Inez Simon Heyward, his mother in law, Esther Thomas, two sister in laws, Gloria Hubbard, and Felecia Tucker (Ivory), brother in law, Charles Timothy Thomas and a host of nephews, nieces, cousins, relatives and friends. To view the service of Lt. Col. Randy Heyward. Please click the link below. http://webcast.funeralvue.com/events/viewer/37183

On March 15, 1953, in Sumter, South Carolina, Viola Moses Heyward and George W. Heyward were happy to welcome a son to their family. His parents were astonished to learn that they were doubly blessed and were now the parents of twin boys.... View Obituary & Service Information

The family of Lt. Col. Randy Heyward created this Life Tributes page to make it easy to share your memories.

Send flowers to the Heyward family.