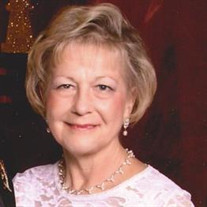 Phyllis Johnson Pollard, 67 of Germantown, TN died Sunday, December 27th at the Baptist Memorial Hospital-Collierville after a long illness. Phyllis started her career as a nurse working at St. Francis Hospital Memphis. She wanted to further her nursing skills and received her masters degree as a Family Nurse Practitioner. After graduation, she moved to Nashville and worked for the State of Tennessee for a few years. Upon returning back to Memphis, she then worked at Prucare for a short period and moved to St Jude's Children's Research Hospital where she worked and retired after 20 years. Phyllis and her husband Tommy have been members of Ptah, part of Carnival Memphis for the past 29 years. She served as a Ptah Princess on several occasions and was the Queen of Ptah in 2002. They both have been long time members of Holy Apostles Episcopal Church in Collierville, TN. She was a member of the dominos club in her neighborhood for many years and loved to put puzzles together and read books. Phyllis is preceded in death by her parents, Arthur and Fern Johnson of Eau Claire, WI and her father-in-law Riley T Pollard, Jr of Ripley, TN. Her survivors include her husband of 31 years, Tommy Pollard, a sister Joan Clark of Clovis, CA, two brothers; Brian (Catherine) Johnson of Fond du Lac, WI and Neil (Beth) Johnson of Weyerhaeuser, WI, three nephews; Michael (Sara) Carmack, Nick and Ted Johnson, mother-in-law Helen Pollard of Germantown, a brother-in-law Bill Pollard of Nesbit, MS and a stepson Clayton (Sara) Pollard of Nashville, TN. A visitation will be held on Monday, January 4th at 10 o'clock with a graveside service following at 11 o'clock all at Memorial Park funeral Home and Cemetery, 5668 Poplar Ave, Memphis, TN, 38119. Memorials may be sent to St Jude's Children Research Hospital

The family of Phyllis Johnson Pollard created this Life Tributes page to make it easy to share your memories.

Send flowers to the Pollard family.