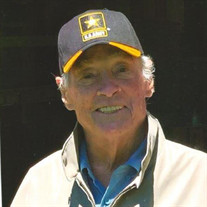 Phillip Anthony Muth (“Pepaw”), 92, passed away peacefully on December 7th, 2021. He was born July 23,1929 to Adam and Lottie Muth in Memphis Tennessee. He was preceded in death by his parents, his brother Adam Muth, and his wife of 45 years, Martha Wattam Payonk Muth. Phil was a lifelong Memphian and graduated from Christian Brothers Junior College in 1947 and Memphis State University in 1954. He served in the U.S. Army with the rank of Sergeant. Phil began his career with Pidgeon Thomas Iron Company in Memphis. He was a manufacturing rep for L.E. Offutt Company for 32 years. In 1989, Phil purchased the Company and sold it in 1995 when he retired. As a traveling salesman, Phil had a quick wit and always had his customers laughing at his joke of the day. He had an adventurous spirit and found great joy traveling the world with his wife Martha. Phil enjoyed working on his farm, collecting classic thunderbirds, antique tractors and guns. He would regularly make generous donations of his antique memorabilia to museums, including a gift of a banjo that was made by, owned, played and signed by the late Gus Cannon to The Delta Blues Museum and a trumpet owned by Bill Justis, Jr. to Sun Records Studio. Phil is survived by children Hollye Payonk Spiotta (Larry), Dr. John William (Billy) Payonk (Brenda), Wendy Payonk Brooks (Craig); grandchildren Erin Spiotta Egan (Brian), Kimen Spiotta Brinkley (Josh), Lauren Spiotta Cannon (Tyler), Phillip Brooks (Sydney), Clare Brooks Manning (Chad), and twelve great grandchildren. A graveside service will be held at 11:00 a.m,, Saturday, April 9, 2022 at Calvary Cemetery. A map of the cemetery layout is attached on photo and videos. A memorial service celebrating Phil’s life will be held 12:00 p.m., Saturday, April 9, 2022 at St. Peter’s Catholic Church, 190 Adams Ave., Memphis, TN. In lieu of flowers, donations can be made to St. Jude Children's Hospital, Forever Young Senior Veterans, 185 S. Collierville, TN 38017 or charity of your choice.

The family of Phillip Anthony Muth created this Life Tributes page to make it easy to share your memories.