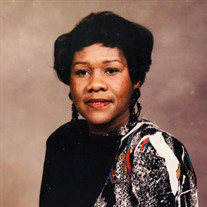 Patricia Ann Maclin-Lee was born in Dyersburg, Tennessee, to Cleo Kirk and Minnie Blevins Kirk, on August 3, 1943. Patricia joined Tabernacle Baptist Church at a very young age. Patricia lost her Father at an early age, however, her Mother had amazing expectations of her five children. All of them graduated from college successfully and furthered their post graduate studies. Patricia received a bachelor’s degree from Tennessee State University, and a Master’s Degree from the University of Memphis. Charlie Maclin Sr., Patricia Ann’s high school sweetheart, became his bride in 1961. Patricia and Charlie became the parents of two daughters, Valerie and Patricia and one son Charlie Jr. Patricia Ann later married Charles F. Lee in 1995. Patricia Ann was known for her ambition, leadership and tenacity in anything that she was involved in. From selling World Book Encyclopedias and owning her own clothing and accessories store. All of this was achieved along with being a dedicated and an accomplished teacher for the Memphis City Schools district. Patricia later developed “PK Phonics”, an unprecedented phonics program. She tutored children at her church Mississippi Boulevard Christian Church, and “P.K. Phonics”, LLC. Her unique and creative skills of engaging children to learn through Repetitious Active Participation, gained notoriety with the Memphis City Schools Board of Education where she later retired from. Patricia was featured in The Commercial Appeal, WREG-News Channel 3, and other known publications. Patricia loved children which is demonstrated throughout her entire life. Through her dedication for the well-being and safety of children, she also strived to make a lasting impact in the community as a true advocate for early childhood education. She opened four childcare centers, her second being named the first infant and toddler facility in Shelby County. Patricia was indeed a community leader as she assisted many families in need, also developing one of the first programs to assist families 24 hours per day with not only providing childcare but providing transportation services to the families that needed assistance. Patricia departed this life on Monday, March 22, 2021 at Methodist-Germantown Hospital in Germantown, Tennessee. She leaves to cherish her memory, her devoted husband, Charles F. Lee; two daughters, Valerie Baskerville and Patricia Turner (Troy); one son, Charlie Maclin Jr.; two granddaughters, Jasmine Maclin and Aspen Turner; and two grandsons, Andrew Davis and Ashton Turner. One sister Martha Kirk Young (Haywood), Chicago, IL; brother Milton Kirk, Memphis, TN. She also leaves Aunts and Uncles, along with other beloved family members and friends. Patricia was preceded in death by her father Cleo Kirk, her Mother Minnie Blevins Kirk, brothers Benjamin Kirk and Dr. Cleo Kirk, grandsons Anthony Aucatavion Davis and Justin Ives Murraine.

The family of Patricia A. Maclin-Lee created this Life Tributes page to make it easy to share your memories.

Patricia Ann Maclin-Lee was born in Dyersburg, Tennessee, to...

Send flowers to the Maclin-Lee family.