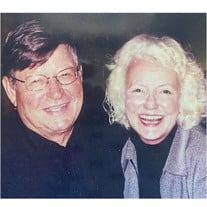 Patricia Dawkins Leary, affectionately known to her friends and family as Hotty, passed away at home on Sunday, September 5, 2021. Born on March 12, 1939, she was a native Memphian. She in the first graduating class at White Station High School where she received the "outstanding senior" award. She and her lifelong friend, Judy Hurst, could still rally their Spartan cheers at a moment's notice. Hotty attended Memphis State University and graduated summa cum laude with a master's degree in education and was a member of Alpha Delta Pi. She was a longtime member of Holy Spirit Catholic Church. Hotty taught at PDS and St. Dominic and was one of the first CLUE teachers for gifted students in the Memphis city schools. She loved her students and traveling with them all over the country for ministudies. She was a dedicated volunteer and a member of LeBonheur Club, Les Passés, the Women's Exchange, and Subsidium. Hotty had a quick wit and very silly personality. She was sassy. She was also very creative and was a talented artist and painter. For a while, she had her own delivery business, Pat's Plants, and had a serious affection for ferns and orchids. She loved to cook, and actually won the Paul Newman cooking contest in the 1980s. Hotty was devoted to her children and her grandchildren. She was fiercely protective of them and never hesitated to act to defend her own. She was known to leap out of the stands at a CBHS football game and chew out a coach on the sidelines much to the chagrin of her children. That was our Hotty. She made her home with her daughter, April, granddaughter, Sophie Coffee, and her beloved basset hound, Penelope. While April was her devoted caregiver and closest confidant, Sophie was her best friend. They adored each other and thought the other hung the moon. Hotty loved visiting her son, Scott, and his wife, Mary, in Oxford Mississippi. She thought Scott and Mary are amazing parents and she was so proud of her "Oxford Grands." While she was proud of all of their accomplishments, she was even more so at what wonderful, kind people they have become. Hotty was married to the love of her life, John Leary, a cotton merchant. She often said that she never had a fun day in her life before she met him. While they had a large group of friends and loved to travel, they would prefer to spend lazy days at Horseshoe Lake with each other. They were joined at the hip as she loved to say. There was never a dull moment with these two. They loved to dance and could really cut a rug! Their house was always filled with love and laughter. Family and friends will always remember stories of their misadventures. She had mentioned in recent weeks that she had been dreaming vivid dreams of dancing with Papaw and even water skiing tandem with him. So while we are saddened by the loss of our beloved Hotty, we can rejoice knowing that Hotty and Papaw are together laughing again. Patricia Dawkins Leary was preceded in death by her father, James Terrell Dawkins, her mother, Alleene Lamb Hudson, and her younger sister, Rebecca Belle Dawkins. She leaves her two children, Scott Leary (Mary) of Water Valley, MS and her daughter, April Leary of Memphis. In addition, she leaves her grandchildren, Sophie Coffee Leary of Memphis, Forrest Leary(Caroline) of Dallas, TX, Mary Haston Vest(Tyler) of Chapel Hill, NC, Elizabeth Brock (Garrett) of Dallas, TX, Luke Leary(Mackenzie) of Jackson, MS, Kolbe Leary of Jackson, MS ,Nate Leary now at Texas A&M and the youngest of the "Wolfpack", Jake Leary of Water Valley, MS. She was so touch to become a great grandmother to Forrest and Caroline's son, John Haston Leary. Her beloved brother in law ,David Leary(Cathy), resides in Greensboro, NC. Please join us in celebrating the life of our Hotty. The family will receive relatives and friends on Wednesday, September 8 from 5:00 pm until 8:00 pm at Memorial Park Funeral Home and Cemetery, 5668 Poplar Avenue in Memphis. The funeral service will be on Thursday, September 9 at 10:00 am also at the funeral home. The committal service will immediately follow. The family asks that in lieu of flowers, donations be made to the Cotton Museum of Memphis.

Patricia Dawkins Leary, affectionately known to her friends and family as Hotty, passed away at home on Sunday, September 5, 2021. Born on March 12, 1939, she was a native Memphian. She in the first graduating class at White Station High School... View Obituary & Service Information

Patricia Dawkins Leary, affectionately known to her friends and...