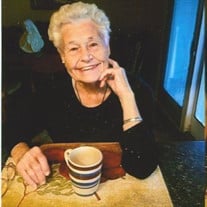 Patricia I. (Riney) Cheshire, Born in West Louisville, KY, August 2nd, 1926. Married J.W. Cheshire on September 27th, 1946. Patricia and J.W. were married for 26 years, until J.W. passed on November 25th, 1974. Parents were Leon (Irmine Mulligan) Riney. Patricia came from a large family of 11. Surviving siblings are David Riney (Mary), of La Jolla, CA; Mary Lou (Riney) Mudd, of Owensboro, KY; Virginia (Riney) Dorsen, of Ketterson, OH. Patricia was predeceased by her children: Rodney Leon; Baby Jimmy; David; Paul; Joseph; and is survived by her children: Mark (Susan) Cheshire, of Pflugerville, TX; Becki (Larry Cooper) Principe, of Pittsford, NY; Steve (Joanne) Cheshire, of Rochester, NY; Mary (Neal), McDoniel, of Murray, KY; Ruth (Robert) Scala, of Fort Mill, SC: George (Janice) Cheshire, of Memphis, TN; Peggie (Kendall) Shipley, of Memphis, TN. Patricia is also survived by 26 grandchildren, 21 great grandchildren, and one great great grandchild. J.W. Cheshire worked for Southern Bell in Owensboro, KY for years and then moved to Rochester, NY for a few years. In 1971, he moved to North Bergen, NJ, working as an engineer for NY Bell, until his passing in 1974 from lung cancer at the age of 49. The family then moved to Memphis, TN to be closer to family. Patricia then opened a nursery where she passed on her love of children to countless other families. Her faith was very important to her, and she gave generously of her time to her church Holy Rosary Catholic Church. She was involved in the following organization – Birthright of Memphis; Legion of Mary; and Ladies of Charity. She was also a crossing guard for Holy Rosary Elementary School for several years. Patricia won a Rosarian Award in 1993. The visitation will be held 5:00 p.m. to 7:00 p.m., Sunday, September 26, 2021 at Memorial Park Funeral Home. The Funeral Mass will be held at 10 a.m., Monday, September 27, 2021, at Holy Rosary Catholic Church. Interment will be in Owensboro, KY. In lieu of flowers, the family request donations to St. Jude Children’s Research Hospital Memphis TN or Birthright of Memphis TN. Click the link below to view the visitation: http://webcast.funeralvue.com/events/viewer/60917/hash:9301F334B41359A7

The family of Patricia I. Cheshire created this Life Tributes page to make it easy to share your memories.

Send flowers to the Cheshire family.