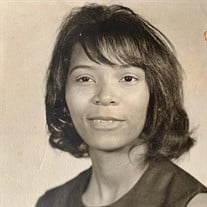 Ophelia Bullard Henry Muse, 78, of Memphis, TN, peacefully passed away on January 31, 2021 in Memphis, TN at Methodist Germantown Hospital. She was born on March 2, 1942 in Nesbit, MS to the late Benodis Bullard, Sr and Minnie P. Bullard Wilkerson. She retired in 1996 from Kellogg’s (Memphis, TN) where she worked for 25 years as a relief worker in the processing and packing departments. Ophelia was a member of Miracle Temple Ministries for over 25 years located in Southaven, MS. She served on the Usher and Mother Boards. She was preceded in death by one sister, Warrett Bullard Alexander; two brothers, Melvin Bullard, Sr., and Benodis Bullard, Jr. She leaves to cherish her life and memories; three sons, Derwin (Christine) Henry, Royce Henry, Sr. and Marcus (Felicia) Henry, Sr. of Memphis, TN; four daughters, Marva (Michael) Dunn of Hernando, MS, Contora (Kenneth) Askew of Olive Branch, MS, Latashia Muse and Temeka Muse-Boyd of Memphis, TN. She is also survived by two sisters, Joyce Anderson of Memphis, TN and Judy Bullard of Indianapolis, Indiana. She leaves 16 grandchildren, a host of great-grand children, nieces and nephews. She will be truly missed most of all by her family. She was a devoted, loving, and caring mother, grandmother, sister, aunt, and friend. She would always put the needs of her family before her own. She was there when we needed advice and a shoulder to cry on. She was a great example of kindness. If you asked her how she was doing her response was “I won’t complain”. Visitation will be held at Memorial Park Funeral Home and Cemetery, 5668 Poplar Avenue in Memphis, on Thursday, February 11, 2021 from 4:00PM-7:00PM and a funeral services will be held on Friday, February 12, 2021 at 10:00am also at the funeral home.

The family of Ophelia B Muse created this Life Tributes page to make it easy to share your memories.

Send flowers to the Muse family.