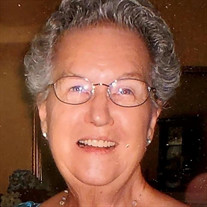 Norma Ann Leadford, 84, of Olive Branch, Mississippi, passed away on November 3, 2021. Norma was born on January 3, 1937, to Orvil Lucian Cotten and Rebecca Ann (Alsup) Cotten in Memphis Tennessee. She had an older brother, O.L. Cotten Jr. and sister, Helen Hindman. She lived in the same house until she married. She went to kindergarten at Memphis State Training School and attended Messick High School. She enjoyed good times with neighbor friends and those she went to church with, such as going to football games, skating rinks and fair grounds. When she was in the 12th grade, she met Walter Thurman (W.T.) Leadford at Central Avenue Baptist Church. Their first date was going to a Valentine banquet at their church in 1955. They were engaged May 14, 1955, and married August 19, 1955. They went on to have three children, Linda Hardin (Farragut, TN), Cathy Burns (Olive Branch, MS) and Becky Wilkins (Collierville, TN). Norma was a full-time mom and homemaker, and did volunteer work for the American Red Cross at V.A. Hospital. In 1982, Norma and Walter moved to the family farm they had purchased in 1978 in Saulsbury, Tennessee. While there, Norma started writing the Saulsbury News for the Bolivar Bulletin Times. Norma knew and befriended everyone in the community and interviewed many Saulsbury citizens to feature them in her articles. She also loved the home-makers club while in Saulsbury. In 2008, Norma and Walter sold the family farm and moved to Olive Branch, Mississippi. They attended LaBelle Haven Baptist Church together and Norma volunteered with numerous organizations and enjoyed every opportunity they had to spend time with their friends, daughters, grandchildren and great-grandchildren. Norma was predeceased by her parents and brother. She is survived by her husband, her sister, three daughters, eight grandchildren and twelve great-grandchildren. Services will be held on Monday, November 8, 2021 at Memorial Park Funeral Home, 5668 Poplar Ave., Memphis, TN. Visitation from 12:30 - 2:00 PM. Funeral at 2:00 PM

The family of Norma Ann Leadford created this Life Tributes page to make it easy to share your memories.

Send flowers to the Leadford family.