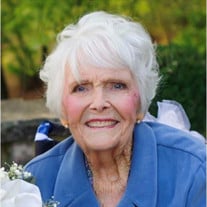 Nellie Beard Daniels, of Germantown, TN, age 97, passed away June 18, 2021. She was born December 25, 1923 to James Peter Beard and Tressie Magnolia Beard in Clarkton, North Carolina. Nellie attended 71st High School, Fayetteville, NC where she met the man of her dreams, Thomas Woodley Daniels, Jr. She married Tom/Dad on November 20, 1943 in South Mills, NC. She followed him proudly as he served his country in the United States Navy and Army. She had a green thumb; an avid gardener, as you all have most likely enjoyed the fruits of her labor in her garden. She enjoyed traveling and was able to live in many states and countries throughout the world [Alaska, Italy, Korea and in many of the continental United States]. She has been in all 50 states less one, North Dakota, and she actually lived in Alaska before it became a state in 1952. She was a dedicated tennis fanatic and loved all sports. She loved anything and everything that had to do with her children, grandchildren and great-grandchildren, including camping, fishing, swimming and traveling. She would not hesitate to “jump” in the car and travel 15 hours to see her grandchildren; and mind you driving straight through. When her husband, Tom retired from the Army they spent time traveling and sharing the gospel on their numerous trips with the Multi-Evangelism group based in Richmond, Virginia. She was quite an engineer. Although she did not hold a “college degree,” she and Tom built the ‘little blue playhouse’ adjacent to their home in Germantown, complete with windows and an air-conditioner. There was nothing that Mom could not do; she excelled at everything she attempted. Nellie had three children, her son Dick and wife Judy, her twin daughters Monika and husband Bill French, and Helga and husband Bill Severin. Nellie is preceded in death by her husband of 68 years 8 months 7 days – Thomas Woodley Daniels, Jr, her beloved grand-daughter – Teressa Rosalind French, two brothers, and one sister. She is survived by six grandchildren; eight great-grandchildren, one brother, and one sister. She loved to cook and could make up a dish in a flash; we loved the holiday dinner times when she would surprise us with a “toss in the pot” dish. The family will receive relatives and friends on Monday, June 21 from 10:00 am until the time of the funeral service at 11:00 am at Memorial Park Cemetery, 5668 Poplar Avenue in Memphis. The committal service will immediately follow. In lieu of flowers, donations can be made to Germantown Baptist Church (Lottie Moon Christmas Offering), St. Jude’s Children Hospital or the charity of your choice.