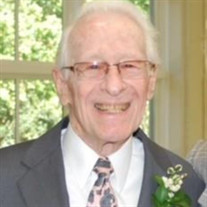 Neil G. Smith peacefully passed away in his sleep January 11, 2021 surrounded by his two daughters at Methodist Hospice Residence. He was born to George Barnie and Evie Sue (Garrett) Smith on August 28, 1929. As a child Neil lived on Central Avenue and he fondly talked of riding his bicycle with friends around the Fairgrounds and Cooper Young. He loved maps and history, but especially Memphis history, and spoke fondly of old buildings and neighborhoods and what they had been like in the past. He graduated from Tech High School and then attended Memphis State College to earn his Bachelor’s of Science majoring in Geography. He became a city planner working for Harland Bartholomew & Associates in St. Louis, Missouri and Ashtabula, Ohio. From there, he returned to Memphis to work for the Memphis-Shelby County Planning Commission. In 1964, he married Patricia Ann (Freeman) Smith who passed away in September 2019. They were married for 55 years and had two daughters, Valerie (Kenny) Hight, and Linley Schmidt (Jonathan McCarver). He was a member at Second Presbyterian Church where he was a tenor in the choir. Singing was his gift and he loved to do it. As a young man, he performed with a barbershop quartet. After his years in the church choir, he moved to the Sea Isle Park area and joined the choral group at the McWherter Senior Center. Even during doctors appointments, he was known for breaking out in song! He enjoyed bringing a smile to their faces. Neil enjoyed his daily crossword puzzle, a good pun, reading the newspaper funnies (he said they kept you young), banana cream pie, cats (and some dogs), reading, long naps, and a good laugh. He will be missed by many. Neil was preceded in death by his parents, his wife, and his brother, Richard Smith. He is survived by his two daughters and five grandchildren, Christopher Grayson Akridge, Alden Schmidt, Duane (Kaylee) Hight, Kaylie Groves, and Eric Hight. In lieu of flowers, the family requests donations be made to The Memphis Symphony Orchestra (memphissymphony.org) or Methodist Hospice Residence (methodisthealth.org). To view the webcasted service click the link below: http://webcast.funeralvue.com/events/viewer/45929

Neil G. Smith peacefully passed away in his sleep January 11, 2021 surrounded by his two daughters at Methodist Hospice Residence. He was born to George Barnie and Evie Sue (Garrett) Smith on August 28, 1929. As a child Neil lived on Central... View Obituary & Service Information

Neil G. Smith peacefully passed away in his sleep January 11,...