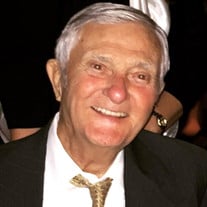 Neil Haywood Pinkley, Jr. "Pop", 95, of Memphis, TN, went home to be with the Lord, Tuesday, June 15, 2021 at his home. A celebration of life service will be held Friday, June 18, at Bellevue Baptist Church Pollard Chapel, 2000 Appling Road, Memphis TN. Visitation from 1:00 p.m. to 2:00 p.m. with the service following. Neil was born June 21, 1925 in Memphis, TN to Neil H. Pinkley, Sr. and Lena Henry Pinkley. He served in the Army Airforce beginning in 1946. He married Alma Sue Ricks June 18, 1948. Neil started employment at the Memphis Ford Plant and transferred to Lorain, Ohio Ford Plant in 1958 retiring in the early seventies. Neil and Sue opened the Pit Barbeque Restaurant in January 1969. They lived in Vermilion, OH and were long time members of Lakeview Baptist Church where they were both very active. Neil served as a youth Sunday school teacher and a deacon. They moved back to Memphis in 2003. Neil and Sue became members of Bellevue Baptist Church. Neil loved his Living Word Sunday School Class and did not like to miss a Sunday. Mr. Pinkley is preceded in death by his parents, and his wife, Alma Sue Pinkley, two sisters, Jean Keller and Mary Vance and his grandson in law Mike Ware. He is survived by his daughters Pamela (Harvey) Stone of Memphis, Patricia (Mike) Goodman of Henderson, son Steve (Dana) Pinkley of Iowa, 29 grandchildren and spouses, 58 great grandchildren and spouses and 12 great great grandchildren. The family request memorial donations in his honor be made to Bellevue Baptist Church, Lakeview Baptist Church in Vermilion, Ohio, or Hidden Acres Christian Center in Dayton, IA.

The family of Neil Haywood Pinkley Jr. created this Life Tributes page to make it easy to share your memories.

Send flowers to the Pinkley family.