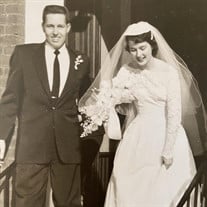 Nancy Steinert McCaul of Trenton, Tennessee, passed away on December 19, 2020 at the age of 84. She graduated from Peabody High School in Trenton, and then attended Belhaven College in Jackson, Mississippi. After her marriage, she attended First Baptist Church in Trenton, Tennessee and was active in many of its programs. She taught Sunday school for toddlers while her children were young, and later was a longtime teacher for the Class of Ruth. In addition she enjoyed working with the WMU. Many of her closest friends came through the church. At the same time, she stood as an extra mom to many of the children on the street. Some were calling for advice or just to talk until quite recently. While her children were in elementary school, Nancy began to sew clothes for her daughter and herself. She became quite accomplished, to the point that she tailored blazers for Marjorie to take off to college. When her children were grown, she began to quilt, and made some for her grandchildren. She read widely, especially enjoying the background material for her Sunday school classes, her Bible, and the novels of Miss Read. She introduced her children to old movies and Masterpiece Theater. While they were able, Nancy and her husband Evans enjoyed making short trips around the region. Evans was a University of Memphis fan, they would attend home football games, often with Mack and his family. Occasionally they would go farther, once flying to Germany to visit their grandson, as well their daughter and son-in law. Nancy was the daughter of Ernest and Bertye Steinert. Last year she lost her husband of 62 years, Evans McCaul. They leave two children, Marjorie McCaul Robinson (Hoke) and Mack Evans McCaul, Jr, and two grandsons, Ernest Steinert Robinson and Mack Evans McCaul III. Her two brothers, Ernest “Spike” Steinert (Darlene) and Peter Steinert, live in Somerville, Tennessee. A special thank you and recognition goes to the staff of AHC Applingwood, who have shown love and given such tender care to Nancy and to Evans. The family requests that any memorials be to First Baptist Church Trenton or the charity of the your choice. A graveside service will be held on Tuesday, December 29 at Oakland Cemetery in Trenton, TN. at 1:00 p.m. Due to the pandemic emergency, this will be limited to family.

Nancy Steinert McCaul of Trenton, Tennessee, passed away on December 19, 2020 at the age of 84. She graduated from Peabody High School in Trenton, and then attended Belhaven College in Jackson, Mississippi. After her marriage, she attended... View Obituary & Service Information

The family of Nancy Steinert McCaul created this Life Tributes page to make it easy to share your memories.

Nancy Steinert McCaul of Trenton, Tennessee, passed away on December...

Send flowers to the McCaul family.